Gaming may be bursting at the seams with rich, detailed universes, but complex and interesting protagonists are thinner on the ground. The main reason for this lies in the interactive nature of videogames: Exploring a world is fun, but passively observing a character's behavior in a cutscene is not. But there is a way for developers to harness the narrative power of exploration to convey complex characters without ever taking control away from the player. Just as a well-realized environment is arguably the most effective method games have of conveying a world's history to the player, so a carefully designed home can convey more about a character in a few minutes of inquisitive game play than several hours of dialogue-heavy cutscenes. If a man's home is his castle, then a videogame character's home is the window to the character's soul. 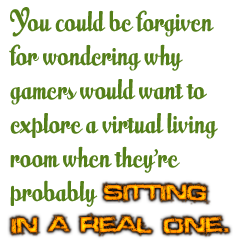 BioShock's brass plaques, consumerist posters and period detailing tell the complex story of Rapture. In the same way, April's eclectic yet homely bedsit in The Longest Journey effortlessly shows us her character: humorous, artistic and conflicted. Despite a troubled past that compels her to keep a handwritten diary on hand at all times, April still harbours a lingering affinity for keepsakes from her childhood, such as clockwork monkey Constable Guybrush. It is a side of herself she keeps hidden however, as Guybrush is stashed away in her wardrobe, unlike her college timesheet and art materials, which remain on prominent display.

It only takes a few minutes to explore April's room, and yet these few minutes provide the story and its protagonist with a strong identity and an emotional center that resonate for the duration of the game. Which begs the question of why, when domestic spaces are apparently so adept at conveying character, are they so often neglected in favor of more escapist and impersonal environments?

The obvious reason is that the compulsion to play videogames is largely based upon the desire to escape the real world. You could be forgiven for wondering why gamers would want to explore a virtual living room when they're probably sitting in a real one. After spending a day wandering through various "real life" rooms filled with everyday signs of life, wouldn't gamers rather be whizzing around the galaxy, saving the human race from the Collectors? Well, yes.

Mass Effect 2 is an example of the kind of ripping space yarn that should reinforce the case for more "standard" settings (space stations, alien planets) over the mundane and the homely alternative. But a closer look shows us the aspects of the game that make it truly special are not those that soar through the stars, but those that nestle on the sofa.