For everyone outside of Valve Software, Half-Life 2: Episode 3 remains an enigma. We don't know if we'll guide Gordon Freeman through a derelict space station crawling with zombies, a windswept and dusty post-apocalyptic desert inhabited by zombies, or an Eastern European city torn apart by opposing armies (and zombies). Episode 3 could conceivably include any of these stock gaming locations. Blasted cityscapes and zombies wouldn't even be a new direction for the franchise. One thing that's virtually guaranteed about Episode 3, however, is that you won't find yourself in a sprawling candy factory dodging frosted donuts the size of cars. 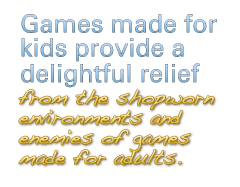 That might seem like a non sequitur but isn't. That candy factory actually exists in another game. It also floats in the clouds and parts of it are built out of sweets; there are buildings made from layered cake and towers capped by giant ice cream cones. It's crisscrossed by broad highways and looping candy cane rails - all the better for running around on. It's Sweet Mountain from Sonic Colors, and what's remarkable isn't that it's so deliriously constructed but that by the standards of children's games, that kind of environment is fairly normal.

A funny picture from a recent article on Cracked.com compared screenshots from Call of Duty: Modern Warfare 2, Killzone 3, and the revamped Medal of Honor. The joke was that you couldn't tell them apart. It's an easy laugh that isn't entirely fair, but it's a reflection of perennial complaints about the lack of variety in videogame environments. Until the phenomenal success of the first Modern Warfare, seemingly every military shooter was set in the ruined cities and villages of World War II Germany; after Modern Warfare, they've been collectively reimagined into the Middle East and the post-Soviet Russian countryside. Fantasy-themed games aren't much better. They all tend to look like minor variations on Tolkien's Middle-earth by way of the Dungeons & Dragons Monster Manual. And seriously, has there been an M-rated game released this past year that hasn't included some variety of zombie?

Games made for kids - or games made for those Wii-owning, Kinect-buying "general audiences" - provide a delightful relief from the shopworn environments and enemies of games made for adults. Unfettered by the hardcore market's dictate for realism, children's games have been able to create surreal worlds populated by strange creatures wholly unlike those found in most titles aimed at older audiences.

The Super Mario Galaxy games alone are packed to the brim with colorful, creative landscapes. As with Sonic's Sweet Mountain, the levels in the Mario Galaxy games often zero in on the potential of everyday objects and transform them into architecture. One memorable level in Super Mario Galaxy 2 folds and collapses like a pop-up storybook to raise a castle from the flat ground and then lower it again. At other times, the games leave behind the logic of our real world entirely and use the galactic setting as a conceit for fantasias of improbably-shaped planetoids and otherworldly creatures like giant hippos made of lava and chomping ghost heads that trail negative space behind them.