In August of 2009, Valve decided in its infinite wisdom to give out exactly 11,111 virtual items for the game Team Fortress 2, which continues to receive significant updates even three years after its initial release. These items were army medals that can be worn by the Soldier, one of TF2's nine classes. They were shiny. They were new. And people coveted them. 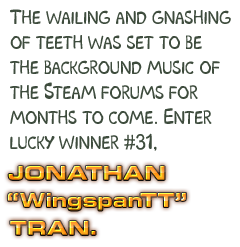 However, there were many that held the opinion that Valve was actually unwise by only granting the item to the first 11,111 people to discover the hidden page of an update announcement. The Steam forums filled up with complaints about fairness, time zones, ratio of happy to unhappy customers, and the lack of opportunity to appreciate someone's work.

Many valid points were made throughout the months of ranting and raving. Valve took things in stride and continued to roll out updates with new, equal opportunity items and tweaks to the random item drop system. "Surely," thought the people, "they had learned their lesson."

And then came along something even shinier.

An early YouTube video showed off the wrench in action. When an enemy was killed by a Golden Wrench melee attack, their ragdoll body would turn into solid gold, à la Midas' touch. It was a unique death animation that only 100 people would have. Since only 100 Golden Wrenches were to be released, it was far rarer than the 11,111 Soldier medals and was extremely coveted.

Expectedly, the backlash from the players was immense. On top of the arguments that were posted before, there were complaints about how the distribution method was not as random as players were originally led to believe. From Valve's initial announcement, it could be gleaned that each and every act of crafting by a player would grant them a shot at getting the wrench. However, it would soon turn out that the distribution system was designed to release a Golden Wrench at specific times and that the next person to craft something after a wrench was released would receive it. This was to ensure that the wrenches would not be given out all at once, but players who had crafted everything that they could on day one felt tricked and misled by Valve. The wailing and gnashing of teeth was the background music of the Steam forums for months to come. Enter lucky winner #31, Jonathan "WingspanTT" Tran.