In other words, the same motivation that compelled your grandfather to collect stamps when he was a kid is still alive and well, staking its behavioral claim in the digital era. It's often been postulated that this desire could be a throwback to our Neanderthal hunter-gatherer roots - something with which Madigan disagrees. "I'm not sure that would be the lens I'd use to examine things," he says. "Evolutionary psychology is interesting, but it generally fails at explaining specific behaviors that are happening right now." 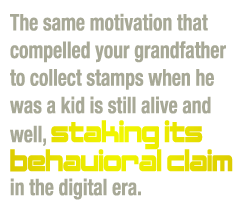 Mark B. McKinley - Psychology Professor for more than 40 years, and himself a dedicated collector of clocks and timepieces - has a number of alternate (and surprisingly practical) explanations regarding the collection bug. "Some people collect for investment," he says. "Some collect for pure enjoyment. Some collect to expand their social lives, attending swap meets and exchanging information with like-minded souls. Some collect to learn and preserve history. Additional collector motivations include psychological security, filling a void in a sense of self. Collections could be a means to immortality or fame. For some, the satisfaction comes from experimenting with arranging, re-arranging, and classifying parts of a-big-world-out-there, which can serve as a means of control to elicit a comfort zone in one's life; calming fears, erasing insecurity. The motives are not mutually exclusive, as certainly many motives can combine to create a collector. One does not eat just because of hunger."

A varied slate, then - all of which translate in various degrees within the world of gaming. Yet McKinley refers exclusively to physical artifacts - an "old-school" tradition of collecting. What about the virtual world Achievements mentioned earlier? What explains the satisfaction gained by killing 10,000 zombies in Left 4 Dead 2 or popping a triple-kill during a Halo: Reach jetpack jaunt? "It's feedback," Madigan elaborates. "It's an indication that the things you were doing were good, and here's your reward. A kind of virtual food pellet. It's also a signal of our status and accomplishment to other players who see them, which helps satisfy our innate drives to get ahead and get along when interacting with others. Building collectibles towards some larger reward also lets us experience irregularly scheduled rewards at a much higher rate. Humans like irregular or random reward schedules, or at least they're often more powerful in shaping our behaviors than "predictable" rewards. Getting a little burst of dopamine from finding a collectible plays on some hard wiring in our brain that's designed to keep us doing what we were doing when the pleasurable thing showed up."