And - of course - there's just good old brattiness. "There's also a school of thought that people want to add unpleasant or arduous tasks to their list of accomplishments just because they are unpleasant and arduous," he adds. "Kind of for bragging rights." Which raises an interesting question - could this desire to collect mutate to the extent that it proves harmful or antisocial? 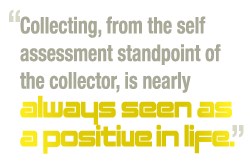 Not really. "We should not confuse collecting with hoarding, as collecting is a good thing," McKinley outlines, dispelling all comparisons between the average gamer and, say, the Collyer Brothers (reclusive New York madmen whose OCD-collection frenzy saw them die while trapped in an apartment crammed with garbage.) "Researchers haven't agreed on whether people who have hobbies are happier and more balanced because they collect things, or they collect things because they're already happier and more balanced. Either way, collecting, from the self assessment standpoint of the collector, is nearly always seen as a positive in life."

This doesn't discount the fact that the urge to collect is a powerful force - so powerful, in fact, that it prods things towards an ethical issue. In the same way advertisers used to drop in subliminal messages during cinema screenings, could videogame makers be exploiting our psychology in order to glue players to their product?

"Those irregular and random reward schedules I mentioned are key," Madigan says. "World of Warcraft and others like it have honed this to a science with random loot drops. Team Fortress 2's crafting and trading system for hats is another great example because it makes every drop a potentially valuable one." The ethical standpoint is a far more obtuse issue. "I generally steer clear of discussing ethics of those kinds of things. I'll just say that the game developers may be using psychological levers to nudge people in the direction they want, but they're not loading them up on a cart and rolling them along against their wishes."

That's not to say there isn't a brave new world for publishers to explore here. Crackdown 2 recently launched a demo that allowed players to carry over achievements/points should they buy the game. The same was true of the relationship between the Dead Rising 2 prequel and the full game. As a prime source of consumer incentive, expect to see a lot more innovation and experimentation in this area.

It would seem that the appeal - and lucrative nature - of virtual collectibles is only going to grow. Mainstream prospects like Facebook now enable the trading and assimilation of virtual goods, and Avatar Accessories are pulling in big bucks on the Xbox.

As for the direct involvement of such collectibles within the framework of proper gaming, maybe sometimes it's counterproductive to overanalyze things. "I'm not really into achievement hunting," Madigan admits. "The only exception I can think of was collecting all the feathers in Assassin's Creed 2." And the psychology behind that? "I think running and climbing around in that game was inherently fun."

C J Davies is a journalist and screenwriter based in London. He exists online over at www.cjdavies.com.