Genre is very much like advertising. We each like to believe that it doesn't work on us, personally; that it's not influential in our lives, and that our purchases aren't based on whether the distributor says it's a "horror," or an "FPS," or a "dom-fom-zom-rom-com." We make our choices based on intellect, desire, need and research. 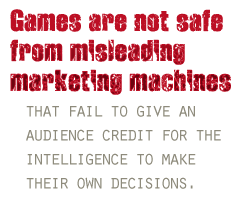 Well, for the most part, yeah. Today's consumer has been taught by the advertising industry to be suspicious and resistant, to approach capitalism with cynicism, and always be ready to kick its teeth in the moment it even looks like it might say something we don't want to hear. But that doesn't mean attention to genre isn't still massively important when it comes to buying games.

Our choices are indeed formed by opinion, rather than coercion, but when we buy a new game or go see a movie, we're buying into expectations set up during its promotion. A game's genre is a contract between the developer and the player, a promise to deliver a particular experience and to meet established expectations. If that contract is broken, we, as seasoned capitalists, will resist that game, even if it boasts other excellent qualities.

A fine example of what genre-bending can do for a film's promotion, irrespective of what that film is really about, can be seen in Guillermo del Toro's Pan's Labyrinth. Check out this trailer and see what kind of vibe it delivers. That vibe is the opening statement of its genre contract. I'll wait here until you've finished watching it.

Looks sweet, eh? A dark and foreboding fantasy that promises creatures of epic imagination, and a fantastical world within a young girl's tormented reality, where a troubled child can become a fairy princess. It's mysterious, beckoning and lush with dark fantasy appeal.

And yet anyone who's seen Pan's Labyrinth will know this is, in fact, a historical war drama. Did anyone get a period war movie vibe from that trailer? Half an hour into the film and the audience fidgets in its seat, wanting to enjoy the admittedly high-quality drama, yet devoid of attention as they wait for the promised dark fantasy and world of strange creatures to appear. They never do, and the tangibility of their absence is enough to spoil what would otherwise have been a great movie, had it honored the contract set by its promotion.

Games are not safe from misleading marketing machines that fail to give an audience credit for the intelligence to make their own decisions. Mass Effect boasts a trailer that really has everything. It promises a game that's full to bursting with action, intrigue, violence and a Star Wars-deep plot that spans a chaotic future. Critics loved it, but many players complained that the game left them sitting impotent, spending a lot more time watching a rambling space opera than blasting aliens.