Sidekicks, by their very nature, are unappreciated. They do all the heavy lifting, while some square-jawed schmuck hogs the spotlight. There is that old shred of wisdom that Ginger Rogers had to do every step that Fred Astaire did, but backwards, and in heels. The fate of the videogame sidekick is no different. They're put through the exact paces that the heroes go through - slogging through every ambush or pit trap, schlepping through every dungeon or monster-infested cave - but the sidekicks receive none of the payoff. They don't get the glory. They don't get the girl. The best they can hope for is that the girl has a palette-swapped younger sister with her weekends free. 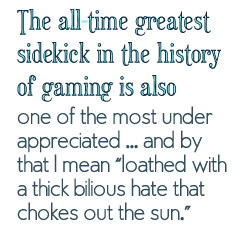 As a further indignity, sometimes the lack of appreciation for the companions of the protagonist runs deeper and the player starts to hate sharing the spotlight. Among gamers, the dislike of sidekicks might be a conditioned response - after decades of buggy escort quests and lobotomized A.I., it's instinctual to distrust the "plus ones" and the tagalongs of the gaming universe that seem to exist solely to drag ass, spout inane dialogue, and absorb bullets like a sponge with a death wish. Fair enough. But every now and again, this ire is directed at someone who is undeserving of such hatred - one companion who is wise and worthy, a sidekick that kicks ass. This might be why the all-time greatest sidekick in the history of gaming is also one of the most under-appreciated ... and by that I mean "loathed with a thick bilious hate that chokes out the sun."

I'm talking about Navi, from Ocarina of Time.

I think Navi is the greatest partner ever to grace a videogame. I know that this puts me in the lonely minority. Link's perpetually-nattering pixie friend has become a punching bag among gamers, who view her constant cries as a nag and a nuisance. She's constantly calling out "Hey!" and "Listen!" - only those lines are delivered like a shriek of wonder from a precocious, wild eyed-child, so it's more like "Heeeeeeyyyyy! LeeeeeeEEEEESEN!"

This might be the most unsung virtue of Link as a hero - not only is he the physical embodiment of courage, and a natural with a sword, he's also a really great leeeeeeEEEEESENer.

Navi's chattiness often has her lumped in with some unfortunate company - the most truly useless sidekicks ever to stink up a game. There's that sniggering demon-dog from Duck Hunt, who writhes in perverse glee at your misfortune, and who no amount of bullets could touch ... he's still out there, somewhere, chortling at how poorly your 7-year-old self handled that zapper gun. And then there's Fox McCloud's naive and bumbling wingman, Slippy Toad, whose dialogue can be summarized as "Oh, save me Fox! There are bad guys and I am bad at spaceships!"