A simple notepad for players to keep track of their game, as an RPG group might, and a custom game of Google Maps Monopoly is yours for free. And while we're on the subject, why not mash-up CSI, Columbo and Clue on Planet Google? 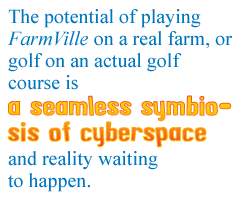 Take the sleuthing out of the mansion and make it city-wide, with more imaginative locations than the kitchen and ballroom, such as an alley full of dumpsters where the murder weapon was ditched, or a corrupt police station to add a bit of extra conspiracy to the slaughter. Players can take a bit of time beforehand to create their own character biographies from a template, and once again Google Maps will provide a game board that's as epic (Washington D.C.) or familiar (your local mall) as you like.

Both these examples draw heavily on the qualities of a paper-and-pencil RPG, which is an area of gaming that uses its world as a linchpin. Already quite demanding in terms of applied imagination, re-engineering an area of Google Maps or Google Earth would be child's play for a seasoned Quest Master, but would take a lot of the leg work out of topography, distance and scale for a fellowship's journeys.

But the current face of Google Maps gaming is one of novelty and basics. Planet Google may quite literally be the size of the Earth, but its gaming population is sparse, consisting of small and simple concepts that don't reach far beyond the individual gamer's immediate environment. The excavation and terraforming of this digital earth is still something game developers have yet to apply their tools to in a meaningful way, but the potential of playing FarmVille on a real farm, or golf on an actual golf course is a seamless symbiosis of cyberspace and reality waiting to happen.

Perhaps the potential danger of losing our perception as to what's real and what's digitized is holding the gaming colonization of Planet Google back. A last, unconscious attempt to hold onto the old reality of a tangible world; a fear of setting out on the unexplored digital sea in case we go too far and fall off the end.

Despite the race for ever-more detail and realism in videogames, do we still demand a distinct separation between living and playing? Google Earth gaming would inherently - deliberately - blur that boundary, as videogames invaded our physical environments. But as unsettling as the notion of seeing Sonic the Hedgehog sprinting through Birmingham's spaghetti junction might be, it's one that's laced with intriguing possibilities.

Yes. Spanner's his real name, and he's already heard that joke you just thought of. Although Spanner's not very good, he's quite fast, and that seems to be enough to keep him in a regular supply of free games and away from the depressing world of real work.