We're on our way home from the holidays. My brother is behind the wheel. He's talking about the time he crashed his car and fell to the center of the earth. 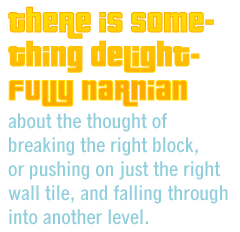 "So I'm driving around one time, and I turn a corner all wrong. I ram up against a building, and keep going. I fall through the wall, and the city, and just kept falling. Forever." He pauses for a second. "I had to restart. I lost all my guns."

The game in question is Grand Theft Auto, but the area he describes isn't one to be found anywhere in the sprawl of Vice City or San Andreas. It's a space out of space - a minus world.

Minus worlds vary in scope and shape, but at heart they are the same; the term describes any place outside the parameters of a game's programming. You can find your way there by accident, or through rigorous trial-and-error. Others are accessed by rooting around in a game's guts through a Game Genie or an edited ROM file. Some are unplayable. Most are unbeatable. They've been around since the Atari, and they're with us still. Taken as a whole, they comprise some of the weirdest spaces in gaming - made all the weirder since they were never supposed to be visited at all.

One of the first and most classic of these levels is in the first Super Mario. Bros.: If you head to the end of the first underground stage, and break a couple blocks above the pipe, you can jump up and slide through the wall just so, and sneak into a warp pipe before the game knows what you're up to. It whisks Mario off to "World -1," - the eponymous "Minus World" - a repeating water level that doubles back on itself, stretching on forever. There's an even stranger "World -1" in the Famicom Disk System version of the game, complete with tree-top levels flooded with water, glitchy Hammer Brothers that fall from the top of the screen, and, oddest of all, the occasional princess just floating in mid-air. All these years, those messages that "our princess is in another castle" have been straight-up lies, though I guess "our princess is just hanging out in some kooky bizarro world" doesn't have the same ring to it.

There is something delightfully Narnian about the thought of breaking the right block, or pushing on just the right wall tile, and falling through into another level. Most minus worlds require a devoted ritual, like a secret knock, to break on through - consider the secret spot in Link's Awakening, which has you killing a set number of enemies then walking though a specific roof tile to descend to a vast, underground dungeon that stretches off in all directions. Others can be bent to your advantage, such as a trick in Metroid that lets you cut corners by falling through certain walls, used in sequence breaking or speed runs. Still others, like the minus worlds in Sonic 2, give you access to levels scrapped before the final version, including the colorfully-named "Genocide City Zone."