And this only scratches the surface. There must be dozens more that we've yet to find, just waiting for a compulsive player to get things exactly right and break through. It's an example of the inestimable variation of play and exploration that some accidental secrets are exposed and become part of gaming's cult canon, even when other intentional secrets lie dormant for years. Such was the case with the "Chris Houlihan Room," a rupee-filled cubbyhole snuck into A Link to the Past to honor a winner of a Nintendo Power contest. The room was accessible through a number of elaborate ways - run a certain distance, fall into a certain pit - but it was hidden so well that it remained a secret for years, until it was revealed more than a decade later through an extensive exploration of the game file. The message within reads "My name is Chris Houlihan. This is my top secret room," which sums things up more aptly than anyone could have guessed. That a hidden room could be so secret as to be completely unknown is either pretty great or pretty terrible, depending on whether you're Chris Houlihan. 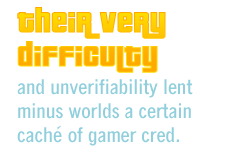 Before the internet, these types of secrets were mere curiosities to be swapped among friends like urban legends. Their very difficulty and unverifiability lent minus worlds a certain cache of gamer cred. Now, with a greater ability to scour our games for anomalies and share this information online, tales of these minus worlds have become common, even ubiquitous - so much so that a new generation of games has winkingly begun to insert their own. Some are modeled after the apparent endlessness of these spaces, such as the purgatorial kingdom of "World -1" in Super Paper Mario, where failed videogame characters ponder their Game Overs for eternity. Others revamp the idea of warping and sequence breaking, such as the "subspace highways" of Scott Pilgrim, appearing as garbled, broken-code versions of classic games, that serve as shortcuts through the game's levels. And then there is the idea of a minus world offering new and challenging spaces to navigate, as seen in the unlockable "negative levels" of Super Meat Boy, which are accessed when you grab onto a flashing and broken sprite of Bandage Girl - Meat Boy's own version of "the princess." At the same time original minus worlds are getting cleaned up and removed from watertight remakes of classic games, we've begun to emulate and pay homage to these spaces. The rough corners that simply don't fit within the game proper, that might otherwise be a part of discarded game design, are now a topic of tribute. Something about them speaks to us. So why are we so interested?