"Magic is a passion for me personally," John Smedley told me in the offices of Sony Online Entertainment in Denver last December. When Sony asked me to go out to the Mile High City to check out Magic the Gathering Tactics, I expected it would be like any other press event, with controlled game demonstrations and limited access to the actual developers making the game. Those kinds of events are usually a one-way avenue of information from developers to journalists, without us able to speak our minds on whether a game worked or not until whatever we wrote was published. But that's not what Sony had in store in Denver. The team led by Mark Tuttle has been working diligently the last 18 months or so crafting a game that works on both the tactical level and as a trading card game. Despite all of his experience, Tuttle needed the help of a few experts to perfect the gameplay and internal economy to ensure the game was a success with Magic fans. Who were those experts? Well, me, and a handful of other Magic players. The developers soaked up our feedback and that changed how I thought about the relationship between us players and the people who make the games. 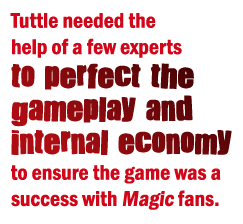 The desire to make a turn-based tactical game based on the lucrative trading card game all began with SOE's President and CEO John Smedley, and his love of Magic. "This is a labor of love for us," Smedley told me. "I play a lot of Magic the Gathering Online, which I think is a great game. I prefer [playing Magic] face-to-face, but I like Magic the Gathering Online because I can play anytime." That didn't stop Smedley from pulling out a deck of Magic cards and offering to play anyone who had brought a deck to a match. Unfortunately, or fortunately for the success of SOE's game, we were all too busy playing MTGT to oblige him.

SOE Denver didn't start out as part of Sony. Before the studio in Denver was purchased by Sony in 2006, it was called Worlds Apart Productions and focused mainly on helping design physical card games (called paper games by Tuttle's team) like the Lord of the Rings Trading Card Game, but the team also designed their online counterparts. Since the Sony acquisition, SOE Denver continued making online trading card games based on Sony's MMOs like Legends of Norrath (based on EverQuest) and the Star Wars Galaxies Trading Card Game. Mark Tuttle leads a team of about 30 employees who've been in the TCG business for a long, long time.

"We've released thousands and thousands of cards with the combined experience in the studio," Tuttle told me in his office when I took a break from playing MTGT. "We understand the mindset of the customer. We understand the expectation that when they purchase a product that has ten things inside the box, even a digital box, if you will, there are certain things that you have to deliver on. We want to make sure that when they open the pack, they find out what they have inside is compelling, is exciting and is fun."