Currently, videogames are created to be fun experiences, or sometimes out of technical curiosity. Art, however, is created from an entirely different motivation: to explore certain themes or to convey messages that cannot be said in any other way. 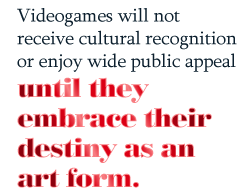 To become an artistic production process, the creation of videogames needs to be reversed. Instead of starting from a well-defined format (such as a rules-based game) and skinning the system with some story to justify the mechanics, the design process needs to start from an idea, an emotion, a concept. Then all interactions, graphics and sounds are created to support the expression of this idea.

If such a production process ultimately leads to the creation of an FPS or an RPG, fine; then you'll have made an artistic rules-based game. But it's a lot more likely that an artistic process will lead you far away from the beaten path. There is so much unused potential in the medium of videogames that it is almost impossible to not make something entirely new, when you work in an artistic way.

To Hell With Efficiency!

Through developing videogames myself, I learned that their production borders on the impossible. Despite what advertisements tell us, computer technology is in fact incredibly primitive. It takes an enormous amount of effort to produce the spectacle we know from blockbuster videogames. This effort requires heaps of time and money and above all an extremely tight production plan.

The admirable tightness of videogame production planning may very well be the core reason why games haven't evolved into an art form yet. There simply is no place for art in such a tight schedule.

The efficiency necessary to produce a game requires that everyone involved knows what is being made. The only way to ensure this is by using design templates that everyone is aware of. Conventions are easy to communicate, but explaining an original idea is very hard, especially if the idea is very personal on top of that.

By definition, the essence of a work of art can only be communicated through the work itself. Otherwise, there is no point to making the work in the first place. This essence cannot be communicated to fellow team members, per definition. In a small studio like our own, we solved this problem by only hiring people who already create the kind of art that fits with ours. Larger teams obviously don't have this luxury. The only way to create art with a large team is for everyone to trust the author to follow his vision and to give him full authority over the production, because the author is the only one who has the real knowledge of what is actually being made.

The games industry will need to shed its fear of giving a single person such an important role in the production process.
Art creation is not a team sport. Everybody needs to work in function of the expression of the ideas of the author.

Videogames will not receive cultural recognition or enjoy wide public appeal until they embrace their destiny as an art form. This entails letting go of an outdated loyalty to the format of rules-based games and rebuilding the production process around a central author (or small creative team). This is a difficult and potentially expensive conversion, but if it doesn't happen, videogames will remain a niche form of entertainment and our cultures will be stuck with cinema and television for another century.

Michael Samyn is one half of Tale of Tales, creators of The Path, Fatale, The Graveyard, The Endless Forest and Vanitas.