There's a lot of talk these days about whether games can be art, but I don't think it's because people are embracing their inner Homo Ludens. The only real reason this is happening now is that computer technology has evolved to the point where videogames can look and sound just like art. So where there's smoke, the thinking goes, there must be fire. 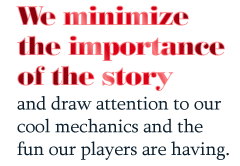 From a distance, videogames feel like films we can interact with, like paintings we can explore. They seem to offer opportunities for meeting characters similar to those in books and for traveling through architectures unlimited by physical constraints.

Yet in terms of cultural relevance, social importance and aesthetic impact, videogames still play second fiddle to cinema, literature or music, because underneath their superficial artistic appearance, videogames are bland, unforgiving, meaningless, cold-blooded, rigid systems. These systems offer a context for goal-oriented, rules-based experiences that already have a place in society: next to other games. Since nothing new is happening here, society is not affected.

Videogames clearly have potential; they just have not accepted their role as an art form yet. Gameplay is king in most videogames. To play them is to compete in a sort of digital sport. Graphics and sound have been added as polish and pretty packaging. Videogames are simply not created as works of art.

Art Is About Something. Games Are Not.

Instead, videogames are manufactured as commodities produced to fulfill a certain need. Unlike other commercial media, what videogames are about is rarely significant. Their entire reason for existing is to provide fun to their customers.

This was probably acceptable in the early videogames era, when the harsh limitations of technology offered virtually no opportunity for games to be anything else, but now that videogames have developed a varied palette of expressive tools, things are different. The fact that the technology is capable of simulating living landscapes and convincingly representing human forms comes with a set of responsibilities, and generates understandable expectations.

When a medium can represent a soldier and it can recreate a theater of war, it needs to have something to say about this subject matter.

The response of the games industry to this dilemma so far has been retreat. We minimize the importance of the story and draw attention to our cool mechanics and the fun our players are having. At the expense, of course, of cultural significance and expanding the audience.

Instead of embracing the artistic potential of the medium, we have retreated into the comfortable zone of gaming.