Guest appearances from Dennis Hopper and Grace Jones couldn't prevent Hell: A Cyberpunk Thriller from being anything other than a complete disaster. Then again, I'm not sure what made me think that particular duo guaranteed a good time. The game's plot, which took place in a dystopian future (what else?) where the United States was under a religious dictatorship that could actually send people to Hell, was edgy and provocative, but the game just wasn't any fun. I felt like I'd been promised a brain-challenging noir adventure only to receive a kick in the shins and a cocktail made from bong water. I hated Hell, and returned it to the store ... after I'd beaten it, of course. It wasn't any good, but it was still a Highly Advanced Gaming Experience, and therefore worthy of my time, if only so that I might speak more intelligently about the benefits of casting celebrities in videogames. 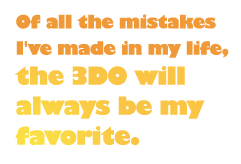 I still anxiously awaited the release of The 11th Hour, which I was certain would blow my mind, but the game that forever reserved a special place in my heart for the 3DO was Killing Time, a first-person shooter. You played as an Egyptology student who becomes trapped on a haunted island while looking for a lost artifact, the Water Clock of Thoth. The island was home to a wealthy heiress who transformed everyone on the island one night in 1932 when she was experimenting with the clock. With crazed chefs hurling cleavers at you from across the kitchen, frustrated ghosts trapped in time through no fault of their own, and odd, slithering things lurking in the basement, Killing Time never let you get comfortable or feel safe. It also took advantage of the technical capabilities of the 3DO with an incredible soundtrack that included several original songs. It was the most remarkable game I'd ever played, even if it did lock up an awful lot.

Alas, my love affair with the 3DO was short-lived. The success of the PlayStation reduced the flow of 3DO games to a trickle, and even those few that were released failed to hold the same allure for me. The 11th Hour, the whole reason I'd purchased a 3DO in the first place, never actually made it to the system. Eventually, I put my 3DO away so that I could focus my attention on the PlayStation and games like Resident Evil.

I know the 3DO was a colossal failure, but I'll always be fond of it anyway. It was big, ugly, and not nearly as amazing as I thought, but it got me thinking about games as more than just childish amusements, and for that it will always be special to me. Of all the mistakes I've made in my life, the 3DO will always be my favorite.

Susan Arendt was really creeped out by the ducks in Killing Time. They were just not right.

Letters to the Editor: System Lords The Escapist Staff 0 Comments
Comments on