Oh, serial killers - you rascally scamps with your elaborate murders and deep-rooted control issues. How we love you in our movies and books and TV shows. But we don't seem to love you so much in our games, do we? In the world of videogames, serial murderers are outnumbered by aliens, monsters, even Italian plumbers and velocitous hedgehogs. Why so coy in the gaming space, serial killers? There's one in Heavy Rain. A few lurking in RPG side-quests. A cannibal in Red Dead Redemption. And though plenty of games taunt the player with a serialist villain, it always turns out to be something more contrived: A vampire. A demon. Some sort of long-expected plumber/hedgehog team-up. 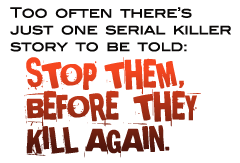 So what's your problem, crazy multi-murderer? Is there something about you and your colleagues that makes you a poor fit for videogames? The guy-who-kills-lots-of-folks genre is well established in other media. It broods within a tectonic crust of cliché so dense it's developed its own gravity. Is that the problem? Are your peculiar habits just not welcome on the far side of the controller? Let's take a look at some adjustment difficulties. Don't be scared. There is only love in this room.

We shouldn't hold that against them. Repetition is, after all, what makes a killer serial. But videogames need change like Hannibal Lecter needs fava beans. It's how they keep us from getting bored - they start simple and drip-feed new challenges and capabilities. But serial killers are static. Change is their enemy. A change in a killer's pattern is a big deal. It ups the stakes. It makes them unpredictable again. But it's so often their downfall - the clue the investigators need to catch them. It's a trick that can only be pulled once.

What's fundamentally frightening about the serial killer is the fear that the lottery of crazy in their head might spit out our name. Through no fault of our own, they might pull our brains through our noses and hang us dressed as a sheep from a local landmark. They're as indiscriminate as an earthquake - a natural disaster with a face. That's scary.

On the other hand, the lack of genuine motive is a problem in narrative terms. There's no real relationship with the victims. All those juicy reasons people kill for - jealousy, greed, fear, love - go unused. Motive is the interesting part of crime. That's why old school whodunits give the murderer a chance to monologue about why they dunit, and give it pride of place in the climax of the story.

Too often there's just one serial killer story to be told: Stop them, before they kill again. Since videogames are finding a wider audience and engaging people that a few years ago wouldn't have been seen dead thumbing a D-pad, they need to be branching out. They need more human emotion, not less.

The closest a serial killer story gets is to delve into a distorted worldview. That brings us to the next problem.