Then there's the game's massive scale and the anticipation of what comes next. Even as I finish researching one technology, I'll eagerly be anticipating the opportunity to get another further down the road. While having a massive army is all well and good, it's even more appealing to imagine how I intend to use it to smite my neighbors before they do the same to me. 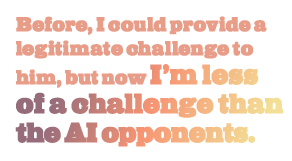 "You want to take one more turn?" Dad asks with a grin on his face. I've just finished loading my car, and I'm ready to drive home so I can get to my day job on time. I agree to it, and unlike most claims of "one more turn," it's one I actually stick to. The game will have to wait until my next visit home. At least we can play a different game by email in the meantime.

Civilization IV isn't the first videogame we've played together. Before that, there were games like Apeiron, but we never played directly against each other. Then, it was a matter of who could get a higher score (it was him). With Civilization, we finally discovered a game we were both interested in playing and that would let us compete together.

For the first year or two, our Civ games were limited to our time together during my trips home. I was in college then, so there would be large gaps between game sessions. Our games played out a lot differently, too. When we first started, I was generally able to keep pace with Dad. Though actual victory remained out of reach, there were times I could pull ahead of him.

Once I got a new computer capable of running the game, we started adding "play by email" into the mix, which is when the game truly clicked as an important addition to our relationship. It's also seen a significant shift in the way our games play out. Before, I could provide a legitimate challenge to him, but now I'm less of a challenge than the AI opponents. In one recent game, I found myself in a standstill war against last-place France and still in the research territory of Astronomy and Constitution, when the game announced that someone had just completed The Kremlin. Dad, meanwhile, who's managed to win games on "Prince" difficulty, was up near the top of the rankings.

Naturally, this has forced me to re-examine my style of play, challenge myself and step outside my comfort zone - something Dad is no doubt aiming for. Whereas he prefers to play at gradually higher difficulty levels and to randomize his civilization, I've tended to stay at a level where I know I have a chance of winning with a leader sporting the best traits. With the email games making it easier for Dad to set things more along his line of thinking, it's thus far left me out of my element.