I'd read comics throughout my childhood, though I was never what you would call a comic book fan. My dad would bring me home Uncle Scrooge comics whenever he went to the store, and sometimes he would bring home huge stacks he'd picked up at garage sales. As I got older, Dad brought home fewer caches of comics, and eventually they stopped coming altogether, until one day, years after I'd last visited with Scrooge McDuck, he brought home an enormous stack full of characters I'd never seen before: Rom: Spaceknight, The Avengers, The Fantastic Four. Our neighbor had been about to throw out his own collection of comics, and my dad stopped him on the way, on the off chance that his little girl might enjoy them. 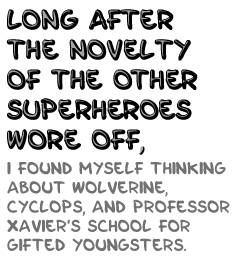 After years of reading nothing but the antics of Disney ducks, these comics were enticingly strange and exotic. They were all hopelessly out of sequence, so I had little chance of piecing together what was going on, but despite the disjointed nature of the narrative, one comic struck me in a way the others didn't: The Uncanny X-Men. I didn't understand why Wolverine wouldn't let the girl named Rogue kiss him, or why it was such a big deal that someone named Storm showed up at a wedding with a Mohawk, but something about the characters kept pulling me back to those pages, again and again. Long after the novelty of the other superheroes wore off, I found myself thinking about Wolverine, Cyclops, and Professor Xavier's School for Gifted Youngsters.

I knew there was a comic book store in the mall near the office where I was now working, so I quietly stopped by one day during my lunch break and bought a few issues of X-Men and Uncanny X-Men. I wasn't sure what difference there was between them, and was too embarrassed to ask; I hoped I could just figure it out once I got home. Later that night, I sat on my bed, slowly piecing together the story as it progressed from book to book, learning more about these strange heroes and the villains who opposed them. In the X-Universe, certain people experienced mutations as they hit puberty; sometimes that resulted in superpowers, other times, it just made the mutant odd. Much of the world responded with fear and hatred, shunning or outright attacking mutants. Magneto and his followers were one side of the mutant equation, responding to ordinary humanity with opposite but equal bile and hatred, while Professor X and his followers used their abilities to make the world better and safer.