There's a moment early in Enslaved: Odyssey to the West when it's easy to forget that Monkey and Trip are digital characters in a videogame. 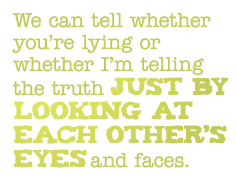 It's after the crash of the slave ship, when Monkey wakes to discover that he's wearing a slave headband. As he stirs, Trip, the young technical genius, sits a short distance away, thin arms wrapped around skinny knees. She watches him with wide eyes. She's not sure if the headband she's hacked will work the way she expects, and she's equally unsure how the lithe and powerful Monkey will respond to being under her control.

Trip doesn't say any of this. There's no dialogue to tell us what's on her mind. We know what she's thinking because we can read it on her face and can see it in her body language. The same way we can sense Monkey's confusion by how his mouth twists, and his suspicion by the way his eyes narrow when he looks at Trip.

"So much of our communication is non-verbal," explains Tameem Antoniades, chief creative ninja at Ninja Theory and the designer of Enslaved. "We can tell whether you're lying or whether I'm telling the truth just by looking at each other's eyes and faces."

Good storytelling in a visual medium like film or videogames, Antoniades suggests, occurs when characters say one thing, but the audience knows they mean something else. It's the "show, don't tell" storytelling mantra that makes the intent behind the words most important. Meaning and emotion are conveyed not through dialogue, but through facial and body movements. A curved lip suggests passion, a furrowed brow indicates fear, a raised arm, anger.

We've come to expect the bodies of our videogame characters to move the way real people move, but as we're seeing in games like Enslaved, the faces of these characters - and therefore their emotions - are also now being rendered with incredible realism. And it's all thanks to a bunch of white dots and some glue, which are the key components used in motion capture.

Motion capture has been in use since the late 1970s, when it was largely relegated to kinesiology departments on university campuses. It's somewhat of an oversimplification, but motion capture essentially involves a camera recording an image of the body in motion, which is then translated into digital information by computer software, converting those little white dots into the angles, speed, and trajectory of a body's movement. That information can then be used to animate a digital skeleton on a computer. Put skin over that skeleton, and you've got a digital character.

Within a few years, the technology of being able to translate real movement into a digital environment was being used in the entertainment industry - movies and videogames - to create more realistic computer-generated (CG) characters. The amount of movement being tracked then was fairly basic. Improving technology meant that more dots could be placed on bodies, leading to even more realistic animations. The next step was putting dots on the faces of the actors, to record the fine movements of things like lips, eyebrows and cheek muscles.

Escape to the Movies: Rise of the Planet of the Apes MovieBob 199 Comments

Letters to the Editor: Box Office Games The Escapist Staff 2 Comments
Comments on