Capturing facial movements was one of the things that made Andy Serkis' Gollum - in Peter Jackson's 2001 film The Lord of the Rings: The Fellowship of the Ring - so memorable. When Serkis first became Gollum, he acted the role on set to establish Gollum's body movements, and again in a small booth, to capture the facial expressions. Digital artists then matched the digital face to the digital body. 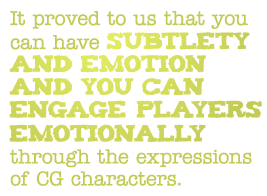 Antoniades tells me that when he saw Gollum, something clicked. "I thought if you can make a genuine performance in a CG character in a movie, then it should be possible to do it in a game." It so happened that Antoniades' brother was working on Serkis' mortgage and introduced the actor to the game designer. Serkis then introduced Antoniades to Weta Digital, the visual effects company in New Zealand that helped create Gollum. "We went to Weta with a statement of intent," says Antoniades, "'How do we create characters that are believable, in real time?'"

Ninja Theory's technical artists spent a year in Wellington to adapt the movie processes for game development, and when the studio started work on Heavenly Sword, Antoniades decided that Weta would be where the motion capture would take place. Serkis was an easy choice to star in the game - also starring was Anna Torv (Fringe). Serkis directed the motion capture sequences.

While facial expressions had traditionally been captured separately from body movements and voice acting, Antoniades wanted to capture them all at the same time. "We wanted to do the entire shoot that way where we were not just capturing each element separately," he says, "we were capturing it all together with multiple actors."

It was the first time that all elements of an actor's performance had been captured simultaneously for a videogame. Antoniades admits that at the time, they weren't sure how it would end up because the final animations that use the motion capture take up to a year to create. "We were totally working blind," says Antoniades, "but I think the results were better than we expected. It proved to us that you can have subtlety and emotion and you can engage players emotionally through the expressions of CG characters."

Capturing body, face and voice at the same time has since become standard practice in film and game design and is referred to as "performance capture." James Cameron used performance capture in creating Avatar. At Comic-Con in 2009, the director said that the technology empowers actors because it frees them from their physical body. "Actors don't do motion," he said, "they do emotion." And performance capture, according to him, preserves every moment of an actor's creation on set.

Peter Jackson, on stage with Cameron at Comic-Con, added: "It's an extension of the makeup process... It's not hugely different than what Lon Chaney did."

Movie makers and videogame creators are using the exact same method to tell stories, says Antoniades. Cameron, Jackson and Steven Spielberg all visited the Heavenly Sword and Enslaved sets, just as Antoniades visited the Tintin and Rise of the Apes sets. They compared notes on how they were doing performance capture and what they were doing with the data afterwards. "Everyone's going about it in their own particular way," says Antoniades. "Filmmakers go about it in a way that is much more similar to traditional filmmaking. We don't know anything about filmmaking so we do it in a totally different way, but it's still the same result. It's trying to tell stories in a virtual way."

On the Front Lines MovieBob 27 Comments

Letters to the Editor: Box Office Games The Escapist Staff 2 Comments
Comments on