Performance capture has become a way for videogames to be like film in terms of showing a story, instead of telling it. Antoniades says that the words in the script don't mean much because the dramatic intent of the scene is what's important. Mid-way through Enslaved, Pigsy tries to find out the nature of the relationship between Monkey and Trip. "I always sort of fancied my chances myself with Trip," says Pigsy. "If you want to take your chances, go ahead," Monkey replies. Trip says nothing. 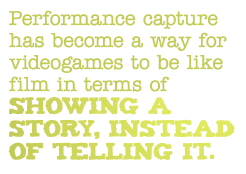 The dialogue is straightforward, but the dramatic intent of the scene is to create tension between the three characters. Monkey is sarcastic, Pigsy is awkward and embarrassed, and Trip is embarrassed for Pigsy and furious with Monkey. "That whole scene... is about eye movements and expressions," says Antoniades. "That's not something you can do without performance capture."

For EA's Fight Night Champion, performance capture made it possible to inject a movie-like narrative component into what used to be a pure sports sim.

Brian Hayes is a creative director and lead gameplay producer on the game, which was just released for PS3 and Xbox 360. Champion Mode, he explains, is a story that puts players in the shoes of Andre Bishop, a young boxer struggling to become a champion fighter. Former SlamBall athlete LaMonica Garrett plays Bishop, while Eliza Dushku (Buffy the Vampire Slayer, Angel, Dollhouse) takes a turn as the daughter of a shady fight promoter.

Hayes, who was responsible for overseeing the script and cinematics for Champion Mode, says that performance capture was essential to getting the level of quality they wanted in the animations. There's no point in creating interesting characters and environments if those characters are just going to stand there like puppets with mouths wagging, he explains. Performance capture helps deliver compelling scenes: "It makes it seem much more like you are engrossed in a real movie."

Real people don't just talk with their mouths, though; they use their faces, their hands, and their bodies. In creating a cinematic scene with dialogue and character interaction, Hayes says, being able to record body and facial movements together is essential. "It means that when we recreate the scene in the game, everything looks human."

Enslaved is a particularly good example. The sequence after the crash of the slave ship is only the first of many interactions between the characters in which meaning and emotion can be understood simply from facial expressions. "Now we have the confidence to say that anything you can do in a movie you can do in a videogame in terms of acting performance and subtlety," says Antoniades.

The next advancement for performance capture, says Antoniades, is to find ways to introduce more interactive, branching narratives. Enslaved was a linear, straightforward story, but by combining the realistic characters that are possible as a result of performance capture with more complex plots, players will be able to more completely empathize and become even more immersed in the games they play.

Blaine Kyllo writes on videogames, technology and culture. He lives in Vancouver.

On the Front Lines MovieBob 27 Comments

Escape to the Movies: Rise of the Planet of the Apes MovieBob 199 Comments
Comments on