If you spend any time watching horror movies, from classic thrillers to B-grade schlock, you might catch yourself marveling at how unrelentingly dense the characters can be. More often than not, the genre trades on rotten people in bad situations making terrible decisions, until it becomes staggeringly obvious to everybody except the people in the movie what should and shouldn't be done. "Don't go in the basement!" "Stay together!" "That artifact is cursed!" Of course, they never listen. The buxom young thing stumbles right into the torture-den and gets vivisected. The owner of that suspicious amulet starts crawling on the walls and spewing pea soup. Serves them right for ignoring sound advice. 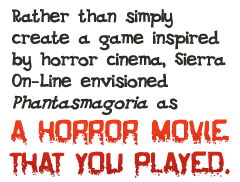 In 1995, as if in answer to the frustrations of the armchair horror buff, Sierra On-Line introduced Phantasmagoria - a new type of game so realistic as to be billed an "interactive movie." The game took its name from a device crafted in the late 18th century, a type of "magic lantern" containing a light source and reflective surface that would shine a shifting image on an indistinct background. It sent audiences fleeing in terror. True to its namesake, Sierra's Phantasmagoria promised to be a technological turning point that changed the way we experienced horror media. There would be no more impotent shouting from the balcony - from here on, we would be making the decisions.

A share of games had taken a stab at succeeding as interactive movies, but none approached the concept as literally as Phantasmagoria. Rather than simply create a game inspired by horror cinema, Sierra On-Line envisioned Phantasmagoria as a horror movie that you played, and its sheer scale reflected those aspirations. The game's script came in at 550 pages, more than four times the size of a traditional movie script, with another 100 pages of storyboards, representing 800 scenes in all. Sierra hired actors to perform entire scenes, which were filmed over four months using a crew of over 200, and even included a Gregorian choir of 135 in the production. The finished game itself was massive, shipping in seven CDs on the computer, and eight for the Sega Saturn.

The live action of Phantasmagoria was not constrained to cutscenes alone. The player was given control of Adrienne, a new homeowner in a haunted mansion, whose every in-game action was performed by an actress. This greater level of visual detail was to make for a new level of player immersion and a new level of videogame horror. Nowhere was the game's cinematic ambition more clear than in the opening scene, in which a series of pixelly, animated torture devices whizz through the aether, each more sinister than the last, chopping and buzzing and spinning in place. This grim montage was interrupted by a cut to the live-action Adrienne jolting up out of bed. The pixel horrorshow was just a dream, after all, but everything that came after was on a whole other level. In a strangely literal sense, things were about to "get real."

But reality is a funny thing, and harder to capture than you might imagine. In Phantasmagoria's case, the combination of the realism of live-action film with the graphical abstraction of mid-nineties PC gaming was a complicated marriage. Though the character of Adrienne was portrayed by a real person, the environments she navigated, ranging from the haunted house itself to the surrounding grounds, were ordinary, pixilated fare. The juxtaposition was odd and unflattering. Rather than Adrienne's physical presence lending these environments a type of realist cred, it often tended towards the opposite, drawing attention to how unreal the backgrounds really were.