Sometimes, I feel badly for my little sister. For years, she's had to endure a constant barrage of gaming jargon from her older brother and her boyfriend, both hardcore gamers. At this point, many people would have either thrown up their hands in defeat or invested themselves fully in gaming. Lindsay, however, opted to take a middle path. While she'll never reach the upper echelons of Halo players or sink forty hours into Dragon Age, her Wii and DS are never far out of reach. Rather than casual games like Bejeweled or Farmville, her staples are The Legend of Zelda and the Just Dance series - which she takes very seriously. 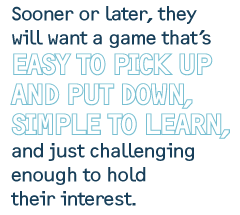 Lindsay represents a new kind of hybrid gamer: one who plays "hardcore" games in a "casual" manner. Instead of viewing games as passive diversions, she sees them as skill-based challenges. At the same time, a game with a deep narrative or a complex gameplay system will elicit only a yawn.

When I asked Lindsay what she wanted from the industry, she replied without hesitation, " [I want] a game that challenges me mentally more than Wii Sports or Mario Party. I play videogames very sporadically, so I can't follow in-depth storylines."

While there will always be a place for narrative-driven experiences with deep gameplay like Mass Effect or God of War, hardcore gamers would be unwise to look down their noses at the rise of the online shooters, the rhythm games, and the handheld market. Sooner or later, they too will want a game that's easy to pick up and put down, simple to learn, and just challenging enough to hold their interest.

Let's get a few definitions cleared up. Many gamers throw words like "casual," "hardcore," and "mainstream" around with such haphazardness that their definitions can be hard to pin down. The simplest explanation of casual vs. hardcore games comes from The Escapist's own Bob Chipman. "'Casual' isn't a proper description of any game, only of how a game is played," explains Bob in Episode 47 of his popular web show, The Game Overthinker. He goes on to explain that the key element of "casual" vs. "hardcore" play is an investment of the player's time. A casual game does not demand much of the player's time to experience its narrative or gameplay mechanics; a hardcore game does.

What, then, is a mainstream game? Is it casual or hardcore? The Oxford English Dictionary defines "mainstream" as "belonging to or characteristic of an established tradition, field of activity, etc.; conventional." In this case, "mainstream" describes the games most people play, and the manner in which people are playing them. Based on current industry trends, the future of mainstream gaming may well belong to the hybrids.

Hybrid gamers use games primarily as a way to connect with friends and family. The hybrid is a distinct breed from the "hardcore" gamer, who invests time in gaming for gaming's sake, and from the "casual" gamer, who views games largely as a diversion.

Letters to the Editor: Going With the Flow The Escapist Staff 0 Comments

The Sunny Side of the Zombiepocalypse Russ Pitts 16 Comments

We Are Not Mainstream Ronald Meeus 64 Comments
Comments on