My second thought was: A buck? I got this for a buck? 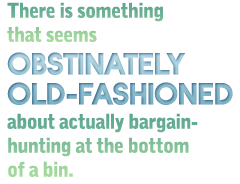 From this episode I'm tempted to say that a bin is a bin, and that all bin-rooters and junkhounds are created equal. But there's something especially unusual about videogame bins, which trade on the dismissive ways we often treat our electronic media. For one thing, distinctions are made about the value of our media - not just as entertainment or as literature, but as literal, tangible objects. We are told that games, as electronics, are a quick fix, but ultimately disposable, doomed to obsolescence by the steady march of better and brighter operating systems and consoles. From this perspective, games more closely resemble the shredded pulp ephemera of comic books than the careful, curatorial reverence of literature "proper." For another, there's something about the bin that seems like a relic from yesteryear. The internet has changed how games are acquired, from the digital distribution of Steam, GoG, and games-on-demand services, to the extensive and esoteric purchasing opportunities of eBay.

Between these two technological impulses - that old games are doomed for the scrapheap anyway, and that any worthy contenders will be remastered in HD and to be downloaded at a moment's notice - why rummage through unwanted games at all? There is something that seems obstinately old-fashioned about actually bargain-hunting at the bottom of a bin. And it is exactly from this perspective that Microsoft recently defended its Games on Demand pricing, saying that "our program is about giving people 24 x 7 convenience and selection when shopping for Xbox 360 games." Translation: We as customers will pay a premium not to do the legwork, not to get our hands dirty, not to even put on pants.

But despite all this, the bin is still around. The bin will always be around, as long as there are games that don't get bought, that slide unnoted between the seams of supply and demand. And perhaps there will always be people who still like to get their hands dirty, who thrill to it for one reason or another. Maybe they can't stand to lose even a dollar on a mediocre title, and want to wait until the asking price bobs ever downward toward its personal value. Maybe they get a certain kick out of peeling price tag after price tag from the upper-right corner of their deeply-discounted game, watching the asking price go up and up, feeling like an archaeologist uncovering a precious relic. Or maybe they're just truly, unrepentantly, unabashedly cheap, cheap, cheap. Cheap enough to muck about where others fear to tread. Cheap enough to put on pants.

So I am a believer in the bin and its mysteries. It's dusty, and sticky, and faintly embarrassing, but I'll get right in there every time, and root around like a pig looking for truffles. Because for me, beyond everything else, the bin is a source of comfort. A comfort that, beyond triple-A preorder bonuses and review aggregators telling you what you should and shouldn't waste your money on, there might be something we're missing: the simple thrill of discovery. The discovery of a great game in an odd place, or a better-than-bad one plucked out of the stinkers. It's here that money matters melt away - because when you get right down to it, the bin is never about what you're looking to save. It's about what you're willing to find.

Brendan Main is cheap enough to put on pants, but just barely.