When the economy gets bad, non-essentials like entertainment are usually one of the first expenses to take a hit. Priorities have to be set when it comes to keeping a tight budget and things like videogames usually don't make the cut. Fortunately there is still an option for even the most frugal videogame players: the PlayStation 2. 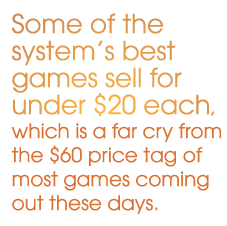 For over a decade, Sony's PlayStation 2 has been a gaming juggernaut, going from state-of-the-art next-generation system to the bestselling game platform of all time. According to Sony, there have been over 150 million PlayStation 2 units sold worldwide. When it comes down to sheer bang-to-buck ratio, nothing can compare to the PlayStation 2's potent combination of affordable hardware and huge back catalog of games.

Even though advances in technology have led to rather significant price drops in the current generation of videogame systems, they still can turn into quite the financial investment. Many people in the market for a new gaming system fail to take into account the extra expenses that are often associated with the purchase of an Xbox 360 or PlayStation 3. From $100 hard drives to $50 wireless controllers, the cost of basic accessories can quickly get out of hand during the initial set-up phase.

The PlayStation 2, on the other hand, is nearly minimalist when it comes to accessories. No need to buy an HDMI cable, hard drive, or wireless adapter. In most cases all you need to enjoy the PlayStation 2 is a controller, a memory card, and a game; all of which can often be purchased for $15 or less.

Accessories aren't the only things that are affordable when it comes to the PlayStation 2. While some people may not realize it, the system itself can still be purchased brand new for $99 at many major retailers. Some online shopping destinations often offer bundles that include the system and multiple games for under $130. For those who are slightly more adventurous, a used system can easily be found at almost any local second hand shop, GameStop or even on eBay for half the price of a new one. For the ultimate deal, find one at a yard sale. While this might be the riskiest as far as the possibility of buying a broken system, the payoff can be well worth the risk. Often the seller can be convinced to sell the system, the accessories, and all their games for a fraction of the price you would be charged at retail.

The potential value doesn't stop after you buy the hardware, though. One of the major benefits with a system as popular as the PlayStation 2 is the ease with which games can be found. Some of the more popular titles like Grand Theft Auto: San Andreas or God of War sold well into the millions of copies, which means there is a hearty supply of them in the resale market. GameStop, eBay, and pawnshops are overrun with popular PlayStation 2 titles and often sell some of the system's best games for under $20 each, which is a far cry from the $60 price tag of most games coming out these days.