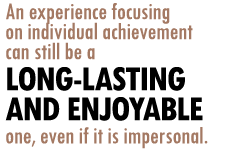 Then one day I couldn't help but notice that a very orderly employee had aligned three different Call of Duty titles (The Modern Warfare games and Black Ops) by order of release date. Though at first glance it might seem like nothing out of the ordinary, it sparked a thought: How do these multiplayer-oriented games of the same franchise all manage to stay relevant at the same time? When it comes to games centered on multiplayer, creating a sequel only really seems necessary when a franchise needs to be brought into a new generation of gaming. Otherwise all you really have to do is release patches and extra content every now and then. With these titles however, it's the same generation, the same online community, the same franchise, the very same game.

One could come up with several reasons as to why this is the way it is. Could it be consoles causing limitations that require a new way of thinking? Is it because a lack of strong modding communities significantly decreases long-term interest? Are games just not as good now as they were before?

But before we go on further, let me just give you a little contrast. Turn back the clock to the years of arcade gaming. Multiplayer then meant you and your friend kicking each others' asses at Street Fighter. If someone questioned your skills, you showed them who is boss with a shoryouken. If you wanted to feel like you were getting better, you had to practice, and you had to practice a lot.

Things are different now. Multiplayer games aren't as personal. You're playing several faceless people that you've never met, and you're playing them over the internet. Defending your honor often means pulling out better weapons, perks, and streaks than your opponent, but it can also mean finding a good camping spot. And if you want to feel better, you just have to get a little more experience so you can level up and get that sweet new weapon skin.

It's the leveling-up part that seals the deal. An experience focusing on individual achievement can still be a long-lasting and enjoyable one, even if it is impersonal. But the fact that you gain experience, that you can level up a set amount of levels, creates a drastic change. Suddenly the multiplayer has a goal, a goal that you can reach if you just play long enough, a goal that, once obtained, divorces the game from a lot of emotional investment. If the experience becomes about leveling up, then once that stops being possible and there's nothing else to do other than just play the game, playing has lost its purpose.