In 1994, Perri Klass argued that "If children's entertainment is purged of the powerful, we risk homogenization, predictability and boredom, and we deprive children of any real understanding of the cathartic and emotional potentials of narrative." She was talking about The Lion King, a Disney film released that same year. 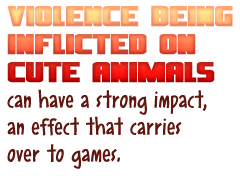 Meanwhile, Doom received its first sequel, building on its predecessor's capability for multiplayer deathmatches. Thousands of Marios and Sonics plummeted to their accidental demise. By '94, gaming's preoccupation with death was well established, but amongst the millions of frags, nothing came close to the emotional impact of Mufasa's fat leonine fingers, slipping one by one from the edge of that cliff.

But The Lion King wasn't the first Disney film that dealt with dying in a way designed both for children and, apparently, to make adults cry uncontrollably. The title of Klass' article, A Bambi For The 90s, Via Shakespeare, drew parallels back to both Will's masterpiece, Hamlet, and Walt's.

When Bambi arrived in 1942, animation was a young medium. Bambi was the Disney studio's fourth fully-animated film and like their previous film, Dumbo, featured an adorable soppy-eyed talking animal in the title role. A single gunshot cemented Bambi's place in not just animation but cinematic history forever.

The death scene stands sorely out against the rest of the film, which opens with an awakening forest of cute, anthropomorphised animals doing cute, anthropomorphic things. The next forty minutes show the young Bambi discovering the world, learning to say "bird" and "butterfly," slipping on ice ... it's fluffy, adorable stuff.

Bambi's mother's death is kept tactfully off-screen, the film instead focusing on the young fawn's reaction. We've been following Bambi on a journey of discovery, and his dawning understanding of death, told through carefully-animated body language, hits hard. It's an understated moment, which allows the emotion to settle as the scene fades to black.

The jarring leap into the next scene - with its cheery song and colourful birds - serves to illustrate Bambi's sharp contrast between adorable fantasy and painfully real loss. Death hasn't been absent from Disney, before or since, but never had it been pushed so directly into the foreground. Bambi showed that animation could talk about death properly ... and make grown men cry their little eyes out in the process.

That contrast is still a potent one today. Even post-Happy Tree Friends, violence being inflicted on cute animals can have a strong impact, an effect that carries over to games. Viva Piñata presents a world of friendly paper animals for the player to tend. You're encouraged to customize individual piñatas by naming them and buying them accessories, which makes it all the more distressing when Professor Pester destroys them, or they destroy each other. These deaths mean something because of your investment of time and because - as in Bambi and real life - they are largely out of your control.