It's every gamer's dream: You play a videogame so much it actually lands you a job making that game. 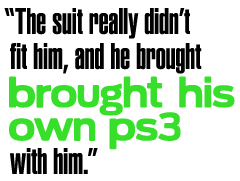 The 28-year old U.K. native has been working at LittleBigPlanet creator Media Molecule for the past two and a half years as a game designer. But before that, he was just a gamer - a construction worker without a high school degree. Though he didn't have much - he didn't even own a computer - Beech did have a PlayStation 3.

And when LittleBigPlanet was released in October 2008, he was hooked. He spent hours and hours playing the game, designing his own levels and finally posting them online. It was around then that Beech was nearly killed on the construction site by a collapsed foundation. After narrowly surviving and a brief stint at the hospital, he noticed his LittleBigPlanet levels, including the well-known "Future Warzone," were instantly popular among the LittleBigPlanet community. It quickly garnered attention from the folks at Media Molecule.

"His levels stood out because they were so intricate and beautifully engineered," said Media Molecule co-founder and technical director Alex Evans. "What we loved about them was that he was trying to do narratives and tell stories. He was doing cinematic things, and we had no idea that was possible at the time. He bucked the trend and used his imagination to do greater things, and we were just really inspired by it."

In fact, Media Molecule were so inspired by Beech's levels, that they contacted him via the PlayStation Network to try to schedule a meeting - but he never saw the message. The whole thing could've easily never happened. Thankfully for Beech, after several missed messages, Media Molecule eventually got a hold of him with the help of the community, and they asked him to come to their Guildford offices to show off his levels in person.

"He came in sweating profusely and completely nervous," said Evans, laughing. Beech had obviously never been on any kind of job interview before, wearing an ill-fitting suit he borrowed and driving a rusty, white builder's van to the offices. "The suit really didn't fit him, and he brought his own PS3 with him," he added. "We were like, 'Um, we have PS3s here. About 50 of them.'"