Every once in a while - not often, you understand - I lose track of one of my kids. I usually know where he or she is, but let's be realistic: they're fast, low to the ground, and ready to take advantage of even a moment's inattention. Recently, my son wandered off in the library and when I found him, he was sitting at a public computer playing Dora the Explorer with the laser-like focus that he is able to muster at will but not, seemingly, at my command. 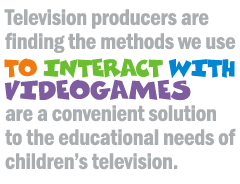 Games had not been a huge part of his life until last year when we began playing cooperative games, not only because we enjoy the content, but also because it's a great way to spend some time together. But here he was, by himself, playing a game he had never seen before. I sat and watched, curious about how he'd do without me there to guide him. His easy success in the game proved what I had suspected for a few years: He'd been playing Dora the entire time he was watching her on TV - all he'd lacked was the controller.

Dora the Explorer, Nickelodeon's series about a seven-year-old, football-headed Latina, is essentially an interactive videogame presented as a TV show. The show's creators have admitted as much, at least as far as the interactivity goes. The effectiveness of this approach is shown every time my kids sit down to play any of the Dora games: The show has already trained them to view and interact with the world in exactly the same ways they view and interact with the games. Since Dora first appeared eleven years ago, other shows have adopted a similar sort of presentation. From the Dora the Explorer spinoff, Go, Diego, Go!, to Disney's new Mickey Mouse Clubhouse, television producers are finding the methods we use to interact with videogames are a convenient solution to the educational needs of children's television.

Games have tremendous educational potential, which is often obscured by their primary role as a medium of entertainment. Like television, games also suffer an unfair bias among some parenting and watchdog groups, who are quick to ride the wave of anecdotal evidence to prove that the media du jour is the cause of violence or apathy among today's youth (as if youth need a reason to be violent or apathetic, or parents a reason to mistrust them). While there are some shows of questionable value, we have to be careful not to throw the baby out with the bath water here. There are television shows out there trying to teach problem solving and general computer literacy and, more and more, they are drawing directly from the world of videogames to present that content.

Each episode of Dora is essentially a linear quest where Dora is tasked with helping someone or retrieving a lost item. Throughout the course of the episode, the show prompts the viewer with game-specific symbols, like floating mouse cursors or glowing highlights around important objects. Each episode features one or more active sequences, where kids are asked to get up and help Dora negotiate a tough obstacle, which are little more than a redressing of Mario jumping over barrels in Donkey Kong.