Turns out I had it wrong.

I used to think of the authors who wrote tie-in fiction as toiling over hot keyboards, struggling to incorporate into their stories a pointed shopping list of details, characters, and plot points mandated by game developers and publishers. I imagined them writing a path through barbed brush while suited executives in the shade on a nearby hill shook their heads and yelled out orders like, "Write another action sequence!" or "Make the dragon bigger!" The truth is, at least among the writers I spoke with via email, much more civilized. 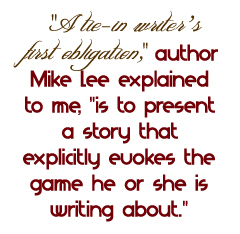 Tie-in fiction is the name for that subtype of fiction that comes branded with familiar logos - Halo, Gears of War, Star Wars, Warhammer 40,000 - and thus promotes, supports, or explores settings that originated in other media. Sometimes tie-ins are novelizations of other stories, like films; more often they are original stories set in the familiar world of a beloved game, film, or TV series.

Some tie-in fiction is considered canonical - officially a part of the game world's lore and history - while other tie-in stories are categorized as what-if side adventures. The novels of the Halo universe are official canon. The Star Wars universe is famously overseen by canon experts.

"A tie-in writer's first obligation," author Mike Lee explained to me, "is to present a story that explicitly evokes the game he or she is writing about. In the case of my Warhammer Fantasy novels, that meant epic field battles, often seen from the perspective of the generals who were leading the armies on the field. I worked very hard to bring that game experience to life, adding color and detail to the experiences that every player enjoys."

To learn more about the art behind gaming tie-in fiction, I wrote to a handful of actual practitioners:

Matt Forbeck has written a dozen gaming tie-in novels for games like Dungeons & Dragons and Blood Bowl as well as the first Guild Wars novel, Ghosts of Ascalon, with Jeff Grubb.

Tessa Kum's first game-related work was The Mona Lisa, a novella she co-wrote with acclaimed author Jeff VanderMeer for the Halo: Evolutions anthology. It has been recorded as an audio book and adapted into a motion comic.

Tobias Buckell, in addition to writing numerous novels set in worlds of his own design, composed the Halo bestseller, The Cole Protocol, and the story Dirt for the Halo: Evolutions anthology.

Mike Lee is a prolific expert on the game worlds of Warhammer Fantasy and Warhammer 40,000, having written ten novels set in those universes. He's also an experienced game writer.

Each of these writers had proven themselves with other work before they landed deals for their first tie-in tales. One thing they all had in common was the pitch process: each author was invited to submit stories they wanted to tell about the game world they were to adapt. For example, Tor, the publisher of Halo: Evolutions, didn't prescribe the stories to be told, Kum explains, "So we went all out with the pitches. There were some great ideas left untold. The complete draft of the story was sent from Tor to the crew at 343 Industries to vet, and there were a few items that we had to alter so as to keep in line with what they had planned for the future of the franchise, but for the most part we were working with full autonomy."