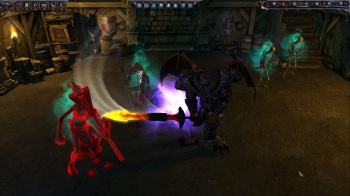 In 1997, Dungeon Keeper famously reversed the RPG paradigm to let you control the villains snuffing the adventurers as they try to plunder your precious underground chambers for gold and experience. But after a few years where it seemed every game developer experimented with that premise, there hasn't been many to try their hand at the very niche genre of dungeon management sim. Thank the Dark Lord then for Impire, the first offering by the 18 member team from Cyanide put together by Yves Bordeleau in Montreal, which brings the fun of ruling your evil "Impire" to the PC next month.

Set in the fantasy world of Ardania from the Majesty series, the game begins with the fumbling cultist Oscar van Fairweather summoning the demon Baal-Abbadon from the depths of hell. Something's gone wrong though so instead of appearing as an imposing Hellspawn with massive black leather wings, Baal is just a little imp. He's got to rebuild his domain, and gain experience to reinhabit the form he deserves. That means summoning workers to carve tunnels and build rooms in the dungeon, defend against adventuring parties with traps or the sword, and enslave the dastardly denizens he encounters along the way.

If that sounds similar to Dungeon Keeper and its ilk, well, that's the intent, but there's enough new and interesting features to make Impire feel fresh. "We didn't want to do a reboot or something," Bordeleau told me at the Paradox Convention last week. "The aim was pretty much, 'Hey, it's been a long time since we had a good dungeon management game, but let's push it further. Let's include squad-based tactics. Let's go outside. Let's go crazy!'

"We call it the bastard child of Dungeon Keeper and Dawn of War," he said.

So in addition to gathering resources like mushrooms to feed your impish minions, you can send squads to raid the countryside of Ardania. Heck, you can even form squads of mixed units, and order them about using numbered hotkeys, which gives Impire a decidedly RTS feel. "You really need to be on your toes all the time," Bordeleau said. "There are so many things to do. We are really big fans of Dawn of War and adding those kinds of mechanics felt really natural in the design."

One thing that's striking about Impire is its high production value. Bordeleau praised his art director Guy England for inadvertently "rebooting" the look of Ardania with a highly stylized presentation. The character design of Baal is cartoony, but definitely not childlike, which I thought was a good choice for such a game. Rounding out the character is the excellent voice-acting, which was surprising in a comparatively small title. The team's proximity to the pool of voice talent in Montreal allowed them to record top-notch vocal talent.

"In Montreal we have one of the best recording studios for video game audio," Bordeleau explained, but even then he had a special discount. "We could afford to have top-notch talent because the chief engineer at Game On Audio was the drummer in my band. We had actors who did roles in Assassin's Creed 3 and Deus Ex. For an indie title, I'm very happy with what we got."

It shows. The main character of Baal has a certain charm you can only get with having a skilled actor behind the impish features. Of course, I can't reveal who the voice was yet. Bordeleau hinted he had recruited a standup comedian from New York to provide the voice for Baal, but he wouldn't give me any names. For now, I'm going to go with Chris Rock. (Note: Chris Rock is not the voice of Baal.)