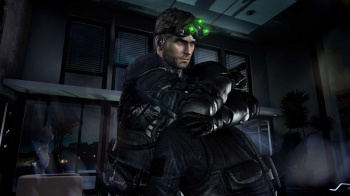 During a hands-off demo at PAX East last weekend, Ubisoft showed off Sam Fisher's return in the upcoming Splinter Cell: Blacklist. The seventh game in the long-running series has Fisher ditching his handlers and stepping into a new role as a leader. The developers have incorporated a lot of new elements into the game, like a central hub, customization options, and improved character animations, while still maintaining Splinter Cell's focus on stealth and sticking to the shadows, though there is some wiggle room if that's not how you want to play.

Blacklist puts Sam in charge of his own crew, the members of which can be found on board an upgradeable cargo ship known as the Hub. This serves as a homebase of sorts, a place where Sam can interact with crew members, which might result in new missions or upgrades unlocking. I viewed several of these interactions, with a developer pointing out the subtlety in each character's actions, like eye movements and disappointed looks. With improved graphic quality and art direction a key focus for Blacklist, the developers wanted the characters to authentically portray the emotional, dramatic tone of the game. Face mocap, body mocap, and voice acting for each character were all recorded at once, which Ubisoft hopes will lead to more realistic interactions.

In the center of the Hub is a map described as a "window to the world," or a global hotspot. The live map shows available single-player and cooperative missions, as well as letting you jump into multiplayer, like the returning Spies vs. Mercs mode. If your friends sign on, you'll see that on the map, and you'll be able to start a co-op mission with them if you so choose. I didn't see any multiplayer aspect of Blacklist, but I was shown parts of two single-player levels, which were accessed right from the map.

The first was set in Benghazi, a level that takes place fairly early in the game. Before the mission started, I got a quick glimpse at the customization and loadout screen that appears before each assignment. In addition to weapons and gadgets, players can choose, customize, and upgrade outfits that fit their play styles, as well as taking into account what's appropriate for that particular mission. The daytime Benghazi setting meant that Sam (and thus the player) had to be aware that he was much more visible. The demo had him making his way through Benghazi hanging from walls, crouching behind cover, and sprinting through rooftops instead of taking a more direct route. The controls let you run, crouch, drop, and climb at the touch of a button, which should make the gameplay feel very fluid.

Blacklist's London level from the second half of the game, on the other hand, was much more traditionally Splinter Cell, and required a stealthier loadout--Ubisoft wants players to "gear up properly." Taking place during a dark, rainy night, the setting forced Sam to stick to the shadows and make strategic use of the few light sources. Nighttime in Blacklist isn't pale or washed out; the darkness forces the player to adhere to the environment and be aware of the light. As the developer put it, "Sam lives and dies by the shadow."

The levels were designed to be more open and give Sam a tactical advantage. These larger, more sandbox-like environments are new to the Splinter Cell series, and they allow each one to be approached from different angles. According to the developer, that means each gameplay style makes Blacklist feel like a totally different game.

Marking enemies, a tactic introduced in Splinter Cell: Conviction, returns in Blacklist and allows gunshots and hand-to-hand moves to be strung together, "killing in motion." Sam doesn't have to be a killer, though; nonlethal weapons and hand-to-hand combat moves may make the game a little harder, but the option is there for those who prefer the additional challenge of not killing foes. Nonlethal gadgets can be chosen in the loadout, and Sam can render enemies unconscious--but they will be revived if they're discovered, so then he's tasked with hiding the bodies.

I received a brief explanation of the economy system, in which you'll earn money based on your gameplay style. These are Ghost, which is traditional stealth; Assault, described as "exactly what it sounds like"; and Panther, a mix of both. Money earned in the single-player game can be used to equip your multiplayer character, providing more incentives to adhere to your chosen playstyle. You'll also make more money by using nonlethal moves.

Multiple difficulty modes let longtime fans of the series find a challenge while allowing newcomers to adapt to the game. In addition to Rookie, Normal, and Realistic modes, the Perfectionist level requires "hardcore stealth." Designed for the old-school fans, Perfectionist strips Sam of some of his newer abilities and reintroduces the unforgiving "one shot, one kill" mechanic.

Though Splinter Cell: Blacklist doesn't force the player to adhere to stealthy gameplay as strictly as some of its predecessors, it's still integral to the game; stealth is part of Sam's personality. Running and gunning is not what Blacklist is about, and trying to play that way will make the game more difficult and, from the sound of the economy system, less rewarding. This seems like a balance that should please hardcore Splinter Cell fans while still appealing to new ones; we'll find out for sure when Blacklist launches on August 20 for the Xbox 360, PS3, and PC.