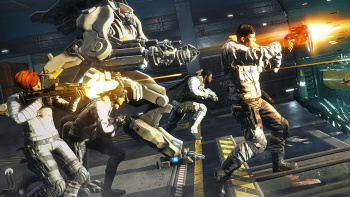 The current generation of console games has introduced us to an absolute ton of new third-person shooter franchises. Some have been great, while others have fallen flat on their faces. At GDC, developer Insomniac Games allowed us to go hands-on with Fuse, a title that the company hopes will land firmly in the former category.

At first glance, Fuse is rather familiar shooter fare: A group of four gun-toting badasses, a futuristic setting, and more rounds of ammo than you can shake a machine gun at. The game's story revolves around an alien energy source called (you guessed it) fuse. Fuse is amazingly powerful stuff, and has a wide array of military applications. As such, weapons that use fuse are oftentimes much more powerful than their lead-firing counterparts.

In the 20 or so minutes that I had with the game, Insomniac CEO Ted Price and I led a co-op assault on some well-equipped space soldiers in an attempt to reacquire some stolen fuse-powered gear. This portion of the game was clearly chosen to showcase the gunplay and combat, and was very light on meaningful plot points.

At its core, Fuse is a cover-based shooter, and the weapons - especially those that use the fuse material - are a ton of fun to use. In our demo, the enemy A.I. was sharp enough to flank and create a couple of tense firefights, and after being downed by enemy fire both my computer-controlled teammates and my real-life partner were quick to rush in for a revive.

Each of the four playable characters - which you can switch between with a simple press of a button - has a unique fuse ability, adding a welcome bit of strategy to the otherwise straightforward skirmishes. Dalton, for example, can create a massive shield which deflects enemy fire, but allows teammates to still shoot through from behind. As he provides cover for the group, you can essentially unleash a hail of gunfire while remaining impervious to attacks from your foes.

While I was just playing with one other live human being at the time, I can imagine that the strategic elements of the fighting increases exponentially when you have a full party of four. Speaking of playing with friends, Fuse will feature 100% drop-in/drop-out co-op, so you never need to worry about a friend progressing through the story on their own to the point where you can no longer join them.

With all of this going for it - as well as a graphics engine that made the visuals on the Xbox 360 version we were playing detailed to the point where I thought objects on the walls were important, rather than simply decoration - Fuse could prove to be a top-shelf offering. However, the thing that is going to set this title apart from Fracture, Inversion, and other promising third-person shooters that eventually fell flat, is its story.

On the narrative front, the hands-on demo didn't impress or disappoint, but instead it kind of skipped any meaningful story elements entirely. Yes, there is banter between the group members, and in the short cut scenes the voice acting was rather well done, but without knowing at least a sizable chunk of the backstory or learning the motivations that led your team into its current predicament, a verdict obviously can't be rendered.

Those of you who have followed the saga of Fuse already know that the game was originally announced under the title Overstrike. The initial trailer for Overstrike appeared very tongue-in-cheek, and while it was heavy on action, it was light on drama. Fuse appears to be headed in the opposite direction, with a darker tone and an overall emphasis on realism over the cartoony, campy style of Overstrike.

I can't help but wonder why the decision was made to change the feel of the game, but at the moment I can't honestly tell whether it was a good call or a misstep, though I will say that I think it's going to be harder to impress gamers with Fuse now that we've all seen what it originally was.

With the exception of the fuse abilities, the game does feel a tad generic, so it'll be interesting to see if the final product can set itself apart from the mountains of almost-great shooters and give us an experience we haven't had before.