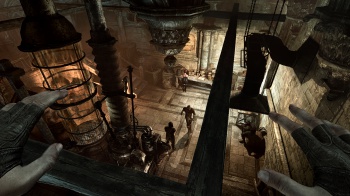 Garrett is back and he's headed to next-gen consoles.

As one of the very first truly stealth-minded videogames ever, the Thief franchise is held in high esteem among many longtime gamers. Still, the last Thief title was released way back in 2004, and as we creep closer to a full decade without a new entry into the series, the field of stealth games is practically bursting at the seams. Does Thief - formerly Thief 4- have what it takes to steal the throne? At GDC, we got a chance to see the game in action, and so far things are looking rather great.

In our preview, we were allowed to watch roughly a half hour of live gameplay as an Eidos team member progressed through a demo level. The mission that was shown - which was an abbreviated version of one that is planned for the full release - involved tailing a target, infiltrating a building unseen, and making away with a special artifact. Very little was shown regarding an overarching narrative for the game as a whole, but despite this the Victorian-age world already felt well-realized and believable.

The titular thief, Garrett, is a master at making away with items that are not his, and as the developers explained, the player is meant to feel powerful and skilled, rather than some newbie learning the ropes. To this end, Garrett has been equipped with some impressive abilities, including being able to peek around corners or objects without being spotted, and slow down hand-to-hand combat in order to pick specific parts of your enemy's body to target.

Thus far, only a few of the game's weapons have been shown off - including the beloved blackjack club and a compound bow. But Thief isn't really about engaging in combat or powering your way to your destination; it's about completing your objectives without the enemy ever knowing you're there. You can accomplish this by creating distractions like snuffing out candles or breaking bottles, all of which will prompt guards and civilians to respond with their own actions.

You may have bested many a stealth game in the past, but rest assured that Thief won't be a simple walk in the park. As I learned straight from the developers that showed us the game, the artificial intelligence in Thief is something that is only possible on next-gen hardware. Whereas in past games, a soldier might react in an "if, then" manner - for example, if a glass breaks, then walk towards the sound - your enemies in Thief won't be so predictable. Say you snuff out a lantern and attract the attention of a guard. At first, the enemy may simply mumble to himself that it must have been the wind, but should you do it again, the chances of the guard growing suspicious heightens. Do it a third time and he may launch an all-out sweep of the area, and each time is different.

Each guard also has a specific amount of expertise which will determine how they react to certain situations. A rookie may ignore a few more strange happenings than an experienced guard would, and if you cross paths with a particularly adept individual, you'll be given very little margin of error. This varied difficulty is designed to not only be more realistic, but also achieves the added bonus of creating more organic, original experiences for each player. In short, it's a rather complex system that appears to work rather well.

As any seasoned Thief player already knows, darkness is your friend, and the same holds true in the upcoming reboot. You'll want to do your best to stay out of the light, and although the game is presented in a first-person manner, the interface (as it currently stands) does a great job of telling the player when they are and are not completely under the cover of darkness. Replacing the "gem" notification icon of previous Thief titles is a small orb that appears in the corner of the screen. The sphere appears bright when you are exposed and goes dark when you are hidden, but that's not the only mechanic in place; a dark shroud appears in the corners of the screen when you are creeping in the shadows to give you a visual cue without requiring you to look at a specific corner of the screen.

When it comes to visuals, the benefits of the new hardware of the PlayStation 4, high-end PCs, and other next-gen consoles is immediately apparent. Even in this early stage, the game looks phenomenal. The most attractive aspect of the visuals are, as you might have guessed, the lighting systems. Everything casts its own shadow (or shadows) and just because a corner is dark now doesn't guarantee it will stay that way.

Things like rain and fire are also more realistic than ever, and in a short tech demo that Eidos showed us to demonstrate this, a rainstorm poured down over the city. But this was no ordinary rain filter or overlay like you might see in most games - we were told that each individual raindrop was being rendered separately, and reacted independently when coming into contact with the terrain.

Still, all the flashy graphics in the world won't make a difference if the game doesn't turn out to be a hell of a lot of fun to play. As we weren't allowed to go hands-on with the title - and considering the fact that it's slated for 2014 - the only thing I can say is that after watching just the short demo on offer, I really can't wait to try it out myself.