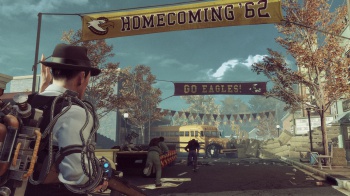 The Commando, for example, can use Pulse Wave to damage, disorient, and knock enemies out of cover; Taunt to force an enemy to attack, often breaking cover in the process; and Shield, which creates a personal force field around the chosen Agent. Each class has its own unique set of skills to set them apart, as well as certain skill choices, such as the Engineer's option of deploying turrets.

Agent Carter gets his own special moves, distinct from any of the classes, which seem to carry a little more oomph than most of the other abilities. Carter gets access to Lift, which raises an enemy in the air for a few seconds, disabling it and allowing your Agents ample time to focus fire without fear of getting blasted back. Additionally, Carter has the Heal ability, which heals all nearby Agents for a significant chunk of health. Given the permanent nature of Agent death in XCOM games in general, Heal is going to be absolutely crucial for all but the most talented players. Even in the brief and largely straightforward demo, I utilized the Heal ability constantly. Lift was particularly useful against stronger solo enemies, and anytime a problem alien is cowering behind cover, it's very nice to have.


On the topic of aliens, you'll have no shortage of extraterrestrial targets to aim for in The Bureau, though only about half of them will be familiar faces. Sectoids, for one, are prominent in the game, being the unwitting victim of advanced mind control techniques. A particularly nasty Muton made an appearance in the demo as well. For those unfamiliar, Mutons are basically organic tanks, able to absorb a ton of hits and dish out huge melee damage if you let them get close enough. The Bureau's Muton gets the Ground Pound attack that deals enormous amounts of damage to nearby Agents. If you can get the Muton to Ground Pound one of the Engineer's mines, though, you'll be in for a particular treat. Most of the aliens are just "Outsiders," which are something like the Ethereals from Enemy Unknown. The Bureau's Outsiders don't have the Ethereals' robes, though, instead favoring a slender, glowing aesthetic over the mysterious nature of the Enemy Unknown antagonists.


Your arsenal will start with 60's era gunpowder-based firearms, but you'll pick up more and more advanced technological firepower from your foes as you progress through the game. This progression is one of the widest discrepancies from the XCOM tradition. Keeping to the fact that the story takes place in the 60's, it just isn't reasonable to expect the human race to develop hyper-advanced Laser Weapon technology. As such, the Aliens now introduce us to the wonder of photon-based warfare. Additionally, if you're a purist, you'll probably be disappointed to know that you don't actually have to research the various alien guns you pry from the cold, dead Outsiders' hands. Instead, you just pick it up and fire away, which offers some instant gratification, but rather detracts from the sense of technological development that usually accompanies a game of XCOM. The section of the game I got to play through had my Agents equipped with a variety of laser weapons, from the familiar Scatter Laser (shotgun substitute) to a Laser SMG, which is brand new for The Bureau, but was reminiscent of a good old Laser Rifle.

All told, there's a lot of promise in The Bureau, but there's still the ever present potential for franchise disappointment. The "Good" includes easy-to-pick-up controls, exciting real-time tactical combat, familiar weapons and aliens, and Agent Carter's sweet fedora. The Not-So-Good includes the weapons-as-you-go approach to developing your arsenal, the unfinished set pieces (a storefront sign in the demo read simply "Accounting," for example,) and the relatively small skill trees for the Agents, with only five apparent ranks in the demo. With launch still months away, everything about this game is subject to change, so keep an eye on it as more details are finalized, as you'll want to get in on the ground floor if The Bureau is even half as good as it could be.

The Bureau: XCOM Declassified launches in the US on August 20 for Xbox 360, PlayStation 3, and PC.