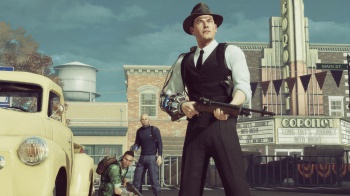 The very notion of a new XCOM-branded shooter was, to say the least, a tad off-putting to many franchise purists. It's been done before, and it wasn't very well received, so XCOM veterans were left wondering, simply, "Why?" The E3 2011 debut video showed a first person perspective, and what seemed to be a solo protagonist, single-handedly fighting off the alien menace. There were occasionally other Agents in the field, but the video showed no interaction, much less any sort of tactics. None of this was really in line with the spirit of XCOM, however, and fan reaction varied from skeptical to outraged. 2K has since re-designed and re-branded the game to be a little more palatable to fans and, from my experience with the demo, the team seems to have done a fairly reasonable job of encapsulating the feel of XCOM from a third person perspective.

The two most glaring changes in the re-design are the shift from first person to third person perspective and the new emphasis on squad tactics in combat, as opposed to the seemingly solo Agent in the older trailers. The Bureau focuses heavily on tactical elements immediately recognizable from Enemy Unknown. Specifically, when you're engaging the enemy, you'll be able to order your Agents to take cover behind walls or objects, perform flank maneuvers for bonus damage, and utilize class-specific special abilities on a given target. The game still plays like a third person shooter, so if you're an elite killer in Gears of War, you'll probably be able to get through many of the encounters without bothering with squad commands, but the availability of the tactical options really helps it feel like an XCOM game. Additionally, the AI still takes cover, shoots bad guys, and on occasion even flanks enemies when you're not issuing orders, so if you're terrible at micromanagement, you'll still be able to hold your own for the most part. Agents don't seem to be able to use special abilities without orders, however, so you'll at the very least want to issue those commands from time to time.


The story is still being kept mostly under wraps, but we do know a few things about it. The Bureau takes place in 1962 in the midst of the Cold War. The Bureau, which is assumed to be the precursor to the international XCOM organization of other games, was created to fend off Soviet spies, but the terrestrial threats have been overshadowed by invading aliens, so The Bureau has had to refocus the organization to combat the new danger. The player will assume control of Agent Carter, a special agent under The Bureau, brought in for his skills leading other Agents in the field. It's not clear at what point in the invasion the game will take place, but the demo showed us a siege that seemed to be well underway. Additionally, to pave the way for their full scale assault, the Outsiders, the main alien antagonists, have somehow poisoned portions of the populace, turning them into mindless, shambling humans, oblivious to the ongoing attack against humanity.


The Bureau is immediately approachable, having deceptively simple controls for a game with so much happening at any given moment. The standard shooter controls will be familiar to any veteran, and the squad commands, accessed through a system called "Battle Focus," let you easily control the behavior of your whole squad in bullet time. Just press a button to activate Battle Focus, use the analog sticks to figure out what you want your squad to do, assign orders to your team, and press another button to execute the orders. That's more or less the entire control scheme, and it works seamlessly in the context of the otherwise typical shooter gameplay.

Again, the merits of translating XCOM to a shooter of any sort are debatable, but the folks at 2K seem to be doing a spectacular job with the transition so far. Playing a mission in The Bureau felt quite a lot like I would expect an Enemy Unknown mission to feel, were you directing your squad on the ground in real-time. If you're a hyper-efficient killer in typical shooter games, you'll probably need to crank up the difficulty for a real challenge, but for rookies who are less experienced with the crosshairs, the squad commands are the bread and butter of the gameplay. Ordering your Commando to flush out the enemies with his Pulse Wave, while issuing a Critical Strike (basically a headshot) from your Recon, executing the orders, and watching the mayhem gives you a sense of pride in your accomplishment, even when you realize that it was only the first wave.

While the Agent classes aren't entirely in line with Enemy Unknown, the majority of them are versions of the classes you may recognize. The Commando takes over for the Heavy, the Recon picks up the Sniper's role, and the Support Officer unsurprisingly parallels the Support class. There's one errant class, however, namely the Engineer, which doesn't really translate to an existing archetype from Enemy Unknown. Each class has a skill tree featuring their class-specific activated abilities as well as perks that give passive bonuses. I doubt the skills I saw are the final and complete list, but they should at least give an idea of what to expect from the final product.