Yoshi gets another shot in the limelight. 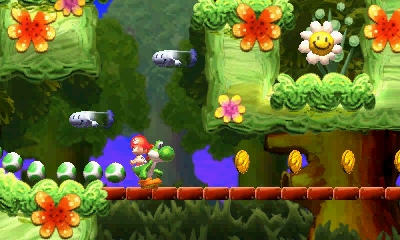 Yoshi's Island was a bit of a different spin on the classic Mario formula, putting the plumber in diapers and putting his pal Yoshi in charge of ushering him to safety. Yoshi's New Island, due out for the 3DS in 2014, copies much of what made its predecessor so elegantly challenging, and adds just enough new elements to feel fresh but not unfamiliar.

Mario is once again a wee baby along for the ride on Yoshi's back. Should Yoshi get hit, Mario begins floating away in a bubble and bawling at the top of his surprisingly robust baby lungs. If you can't catch him before the time runs out, you lose a life. Making it through a level without getting hit is pretty much always the goal of a 2d platformer, but it takes on new urgency when you've add the threat of infantile screaming.

Yoshi can swallow enemies and turn them into eggs, which he can then launch at bad guys, collectibles, switches or power ups. In Yoshi's New Island, he can also create a Mega Egg, which can blast through obstacles, ricocheting around and doing massive damage to the environment as it crashes through pipes and rocks. It's a great way to access areas that would otherwise be off limits, and pretty much the only way to make sure you collect every hidden red coin and flower. Mega Eggs are pretty rare, so a new power up lets you scope out the level by moving the 3DS around in real space before you choose which direction to fire.

Another new aspect coming to the Island is that each world will have a different artistic inspiration - one might be pastels while another is more like oil paint. I only got to see the first world, which was the same chalk and pastel design as Yoshi's Island, and as adorable as you'd expect. I didn't see anything quite as classic as Touch Fuzzy, Get Dizzy, but what I saw had enough hidden goodies, secrets, and twists to convince me that something similarly clever will be on the New Island.

Yoshi's Island was a brilliant entry in the Mario lineage, and Yoshi's New Island looks like it will be a worthy successor. The control was great, the sound was great, the design was great, and the baby...well, the baby was noisy and kind of a pain in the ass. Just the way it should be.