The "Ghost meets Die Hard" game that you feel like you've played before. 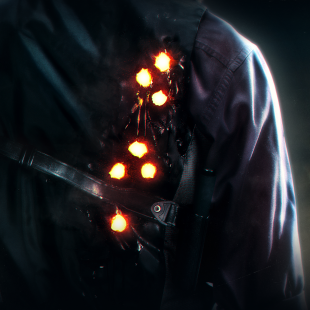 In the tradition of murder mystery and crime investigation games like LA Noire, Hotel Dusk, and Phoenix Wright comes Murdered: Soul Suspect from developer Airtight Games and publisher Square Enix. The game puts players in the ghostly shoes of a dead detective in the town of Salem out to solve his own murder.

I saw the game as an E3 floor demo behind closed doors at the Square Enix booth. A producer guided the audience through the first investigation of the game - the scene of main character Ronan O'Connor's death. Ronan, having only just grasped his deceased status, stands by as his brother vows to avenge him and his colleagues mock his arrogance (and fedora). Then, using a series of pale, hovering sentences in the world to guide him, he sets about gathering clues in the immediate area around the crime scene.

The basic investigation involves Ronan approaching a clue, pressing X to "Investigate" and then guiding a cursor over specific parts of whatever he's looking at to bring up more ghostly words that indicate what it is he's looking at. Viewing his own dead body, Ronan can hover over the chest cavity to bring up words like "fall," or "shot." Selecting the correct word helps him identify his cause of death (he fell, THEN he was shot). Sometimes Ronan can even investigate beyond what the living can see by interacting with shadowy areas or figures that may reveal sequences of events Ronan missed while he was alive (like a mystery witness that didn't come forward after he was killed).

Ronan cannot touch things in the real world, nor speak to the living, but he can possess people that are already touching or holding things he wants to investigate (e.g. like a notebook held by an investigating officer). He can also use possession to eavesdrop on conversations or trigger memories in potential witnesses that are having trouble with their recollection of events. Possession also comes in handy when entering buildings - because part of the fiction of the world is that all buildings in Salem are consecrated so that spirits cannot go into them unless a door is opened.

Once all clues in an area have been gathered - he fell from the fourth story of an apartment, was shot with his own gun, and his killer was familiar with the area), Ronan must make a deduction. This happens when the player uses a menu to arrange the clues the sequence they happened. If done correctly, the next scene of investigation becomes obvious (the apartment) and the game moves forward.

Outside of investigation and deduction, Ronan has the tricky world of "Dusk" to navigate, which is inhabited by other ghosts. Some ghosts are friendly, offering side quests or just avoiding Ronan. Others are red-tinged demon enemies that will try to pull Ronan's spirit form apart - unless he can do it to them first by possessing them from behind. There are also ghostly clues like coded messages and images that only Ronan can see, and possibly only another ghost can help him understand.

The real challenge of gameplay comes from puzzle-solving to help Ronan get around and gather clues. Aside from the possession skill, there are other little tricks Ronan can perform to influence the behavior of the living - like turning on the stove to make a person walk into a room. He can also pass through walls, people and other objects, thereby finding things off the main path that may be useful in tracking down his killer.

I am hopeful for this game, but a little worried if how Murdered: Soul Suspect mixes murder mystery, puzzles, and moody atmosphere will be successful. Even very good murder mysteries are vulnerable to the occasional plot hole - and those can be fatal to average mysteries. If Airtight Games is clever, most of the questions raised in Soul Suspect will be answered -- or made to seem like deliberate red herrings.