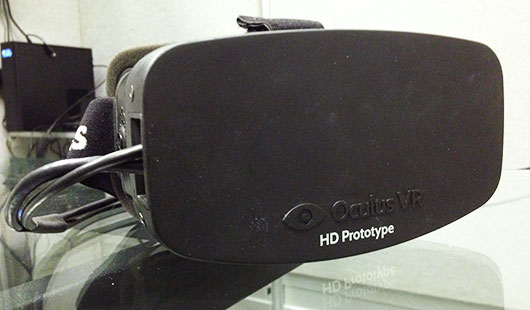 Where did my body go?

I'm standing on a mountain, and it's snowing. When I look up, left, right, I can see snow-flakes that are small at first, then bigger as they get closer to my face. In the distance, there are mountain peaks; there's an entrance to a hollowed-out lava pit in front of me. Then I'm inside, and rivers of lava are flowing to my left and right. There's a menacing armored creature in front of me, and now he's standing up. I turn my head, and I can see more snow falling through the cracks in the mountain. Light from outside is streaming through. "Look at that," I say, pointing.

I'm sitting in a chair in a meeting room at the Los Angeles Convention Center. I'm pointing at nothing.

The phrase "virtual reality" brings to mind cheesy sci-fi inventions and failed attempts at more immersive gaming, but Oculus VR is aiming to change that with the Oculus Rift virtual reality head-mounted display. Thanks to a successful crowd-funding campaign, the developers are working towards making this VR headset available to the gaming masses... eventually. There's no release date or price for the consumer version of Oculus Rift, but over 7,500 dev kits have been shipped, with that number expected to increase to 10,000 by the end of June. Nate Mitchell, VP and cofounder of Oculus VR, told me that developer feedback has been great, with game-makers experimenting in new and creative ways all the time.

Theoretically, there are no limits to the types of games Oculus Rift could support - first-person shooters, puzzle games, and everything in between. As part of the Unreal Engine 4 integrated partners program, the developers are running the next-gen engine on the Oculus Rift, and what's being made now is only the "first piece of a broader platform."

I went hands-on (or, technically, head-on) with two different Rifts: the typical dev kit and an HD prototype that will be more like what the consumer version will look like. I slipped on the dev kit, and despite the low-res visuals, I was impressed: there was a new world all around me. I could turn my head, look up, look down, see what was behind me - there was nowhere in my field of vision that this world didn't exist. The aforementioned snowy mountain, also referred to as the elemental demo, gave me an idea of the incredible depth and immersive power of the Oculus Rift. I was describing things that didn't exist, pointing to thin air, and it was actually a little disturbing to hear the developers talk - I had no idea what was going on in the real world anymore. The world was gone for a little bit.

Then a controller was put in my hand, and I was moving on my own. I could look with my head instead of a thumbstick, and I'd automatically walk in that direction with the controller. Oh, and I could also fly. All I had to do was look up and the controller had me floating diagonally through the air, until I reached the top of the fiery volcano. The coolness of my childhood dream of flying coming true was marred a bit by the slight motion sickness I felt, but that went away as soon as the Rift came off. I asked if that was a common issue, and Nate said it varied from person to person, but it's a challenge they're working to address.