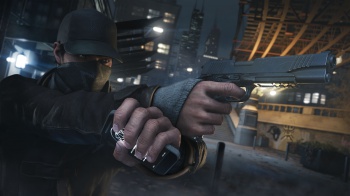 Complexity in gameplay is something that we don't see every day. There are so many twitch shooters and button mashing adventures, there's just not much room for games with involved and thoughtful mechanics. Watch Dogs is looking to change this, and the hype is doing justice to the fact that gamers occasionally want to do something more with their experience.

The setting is particularly compelling due to the fact that it's not exactly far off from where we stand today, with a hyper-connected world, an all-seeing network called ctOS, and, of course, one man looking to stand against the system. ctOS controls everything from traffic lights to the police centers, but Aiden, the player character, is a talented hacker, and can block camera feeds to avoid detection, open electronic gates to gain access to off-limits areas, and even line of sight through a chain of cameras, ending up in a laptop camera in a civilian's apartment. This level of detail is likely the most chilling and exciting aspect of what I saw of the game, and jives particularly well with the open world nature of Watch Dogs.

Playing as Aiden, you can opt to be a good guy or a bad guy, though the ramifications of either choice weren't exactly made clear during the presentation. One thing was made apparent, though, namely that if you earn a bad reputation with the common folk, they may report you on sight, forcing you to flee the police because, according to the presenter, "they will take you down." This sounds like it's no GTA, where you'll deliberately start a police chase, but there wasn't actually anything shown of just how effective the police force is in Watch Dogs, so it may still prove to be a good time.

If you want to boost your reputation with the civilians of the city, you can utilize the fact that ctOS is using cameras around the city in concert with facial and pattern recognition software to predict crimes, as well as potential victims. Interfacing with ctOS allows you to spot these potential victims, escort them safely to wherever they may be going, and interrupt crimes in progress, saving the victim, and earning you credibility with the people. If you can make the people like you enough, they may even turn a blind eye while you steal a car in the course of your heroic business.


Just as with your reputation, you can take multiple approaches to combat, either a stealthy hacking approach, where, for example, you may distract a guard by hacking into a gate, so you can sneak up and coup de grace him. Alternately, you can just equip one of the guns in your arsenal, and go in guns blazing. Naturally, some encounters will require a little finesse, but they've tried to make the option available in many situations to take whichever tact you like.


On the multiplayer side of things, you've got a really novel system, whereby you can stealthily drop into another player's game without their knowledge, in an attempt to hack them personally and harvest their data. The rewards weren't exactly clear, but you can apparently earn new powers from successfully hacking other players. It didn't look easy, though, as they'll get an alert when you start, and you have to remain undetected for an extended period to succeed. Being spotted means you'll either evade, kill, or be killed by the other player. There are less aggressive multiplayer options available, but they weren't part of the demonstration.

From the sounds of it, you'll have primary mission objectives that you can focus on, but if you're an explorer, you can simply wander around the city and find optional objectives everywhere you go. This is typically my favorite part of an open world game, and the appeal of being able to ignore the primary objective for hours on end, and continuously find things to do is really appealing.

Watch Dogs was one of the best looking games at the show, in aesthetics, setting, and gameplay. It's definitely something to keep an eye on, and, while I didn't get hands on, from all I could tell, it's certainly deserving of the hype it's been receiving.

Watch Dogs is being developed by Ubisoft Montreal, and is slated for release on current gen, next-gen, and PC this November.