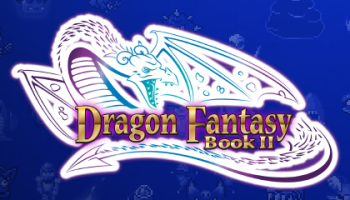 Muteki Corporation, creators of Dragon Fantasy, an 8-bit, NES-styled RPG, is taking it up a notch with Dragon Fantasy Book II by moving into the 16-bit, SNES arena. You'll pick up some time after the original left off, playing as Ogden, the princess' former guard, slayer of dragons, and rescuer of princes. You're goal is now to recover the voidstone, which holds the soul of the dark lord, from somewhere in the land of Westeria.

From the looks of it, this is almost a caricature of classic fantasy RPGs. It takes familiar elements - and its name - from old school titles like early Final Fantasy and Dragon Warrior. You'll wander the world fighting and capturing monsters, which is, in part, how you'll build out your team. While you'll get other characters as well, the coolest thing to me was playing with vanquished monsters that you managed to recruit to your side.

While you'll wander the map and encounter monsters in real time, the combat is all turn based, with initiative being based on your stats. You'll assign all combat moves for the turn, then, in initiative order, the combatants will attack or use special abilities. You'll get AOE moves, like Spin Attack, which actually consider enemy position when deciding what takes damage. Similarly, if you have many enemies in a line, there are charge attack abilities, which can plow through the column, damaging all of the enemies. You've got your basic attack moves, of course, and your specials will consume Mana, just like you're used to.

Another really neat element in Dragon Fantasy Book II is reinforcements. If you're dodging enemies, and trying to make an escape in the real-time non-combat view, but you get dragged into a battle, the enemies you've been kiting can join in, so you'll need to be careful. Instead of trying to rush your way past clusters of enemies, it might be safer to just take them on one group at a time, lest you end up hopelessly outnumbered.


There are even plans to introduce a multiplayer facet to Dragon Fantasy Book II, where you'll be able to split the party, having one player control some characters, while the other player controls the others. You can venture off on your own, or you can stick together, and reinforce your friend when they get into a battle, much like the monsters can do to you.


There are a number of distinct enemy types, with some being carryovers from the original title. There are wolf men, ghost miners, and rock monsters, all eager to claw, swipe, and bludgeon you. Along with a decent variety of enemies, you'll have a fully realized quest system, with the main quest line driving the story, and the side quests to help you level up in case you get over your head on the main quest.

Dragon Fantasy Book II doesn't take itself too seriously, with several of the characters in the story being 16-bit versions of people the team knows in real life, including some of the team members. It was particularly cool to see the pixilated version of the folks at the booth while I played the game. As before, this game isn't trying to do anything new, really. Instead it's focus is squarely on improving a well known and well loved formula, by bringing the classic gameplay and graphics into the new age of gaming.

Dragon Fantasy Book II is scheduled for release on September 10th with Cross Buy on PS3 and Vita, and it will set you back $14.99. If, like me, you've spent roughly a billion hours playing Final Fantasy games over the years, and want a slight change of pace, this is definitely worth checking out.