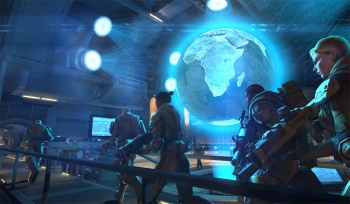 Gene modifications work a little differently, improving the abilities of soldiers you already have been training..Dr. Vahlen in the research department can splice a gene onto the various body parts of your soldiers, but it doesn't affect the class abilities - except in indirect ways. For example, you can modify the eyes in one of two ways, increasing aim after a miss or increasing the height bonuses to aim, while your legs can either provide health regeneration or allow you to jump up onto any height. I modded my sniper with the latter genes, allowing him to get to a high elevation quickly and rain death with devastating accuracy. Modding your soldiers takes them out of active duty for a long while - 3 days per mod, usually - and costs significant amounts of MELD - up to 35 MELD per mod - so you have to pick and choose how you upgrade. I also found some mod bonuses just weren't worth the investment on normal, like the skin mods that improved cover, but may be essential on classic or higher difficulties.

The strategic game has a lot more nuance to it in Enemy Within. You can prioritize research in alien autopsies to get gene modifications, as well as researching alien ship tech for the building of MECs. Satellites, while still important in keeping XCOM council nations happy, can't be produced to the exclusion of everything else. And there's also the threat of EXALT, the new pesky human operatives ready to steal credits from your coffers and disrupt your operations. In practice, I found EXALT more of a nuisance to play through than a truly engaging part of the XCOM universe. Each time I received a message in the situation room that an EXALT cell had attacked, I felt it pulled me away from my plans of defeating the aliens. Of course, lead designer Ananda Gupta said there's a big payoff for that when you finally get to assault the EXALT base and eradicate them once and for all, but I didn't get a chance to test that with this build.

Spoiler Alert! Don't read the rest of this preview if you want the plot of Enemy Within discussed.

What I did get to do was defend the XCOM base from a massive alien assault. In a surprise cut scene while scanning for alien activity, the computer systems in the base start to blink and shutter, and humans with blank eyes start attacking XCOM officers. A random group of your soldiers mixed with raw recruits get cut off from the rest of the base, and have to defend themselves against waves of cyberdiscs, drones, mutons and sectoid commanders, not to mention the big mechtoids and seekers. Your soldiers have only the equipment they had on them when the base is attacked, so you may have to use conventional guns even if you've upgraded to lasers or plasma. The whole base attack mission was a nice change of pace, and the tension was high as I had to make do with the small number of resources available. Adding in raw recruits actually ended up being incredibly fun, and I internally cheered any time a lowly staff member took down a cyberdisc with an assault rifle.

Click here to see the first 30 minutes of my playthrough of the XCOM Base Attack Mission.

In many ways, Enemy Within embodies the perfect expansion. It recognizes exactly what you enjoyed about the original game - the emphasis on choice, both strategically and tactically - and offers more of it. Testing out different builds of soldiers and putting together the perfect XCOM squad for your play style was incredibly satisfying, and the new features allow for even more. Based on my time with it this week, I will play another hundred hours of XCOM: Enemy Within when it comes out on November 12th for PC, PS3 and Xbox 360.