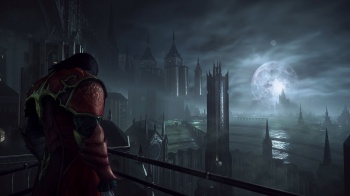 Lords of Shadow 2 opens with a combat tutorial couched inside a flashback. Dracula, seemingly at the height of his power, seems fairly nonchalant considering his castle is under siege by an army that wants his head. It's only as his enemies reach the throne room that Drac deems the threat powerful enough to get Dracula out of his seat and into the fight.

At first (and maybe second) glance, the combat of Lords of Shadow 2 immediately looks and feels very similar to the original and, by extension, the God of War series. After a few minutes of approaching it that way, relying heavily on dodge-rolling and button-mashing, it became clear the combat encourages a different set of considerations. The dual magic system, where weapons and abilities are branded Chaos or Void, returns and certain enemies will require players to switch between the two: Dracula can break down knights sporting large shields using slower, stronger Chaos weapons. Dracula can also revive himself slightly by biting his weakened enemies. Most importantly, players can (and should) block and parry enemy attacks, rather than rolling on the floor like a maniac. Figuring out the timing needed to block and counter automatically demands a higher level of focus than a pure "beat-em-up" action game.

After taking down a few waves of knights and nailing down the combat basics, Dracula heads outside to find his castle being torn down by a giant siege robot that, acting as both environment and enemy, begs for another the God of War comparison. Drac shows off some run-of-the-mill climbing mechanics as he scales and dismantles the weapon while avoiding projectiles and traps. Sprinkle in a few more combat arenas, and it's clear that, while the game has a distinct play-style - one that's more successful than its predecessors - this is not a game looking to re-invent the wheel.

Things get more interesting once the flashback comes to a close and we enter the modern era. Without giving too much away, years have passed since Dracula retreated from the world, presumed dead by his enemies. He's no longer the powerful vampire lord we just controlled, but a sickly-looking, grey-haired bag of bones. (You know exactly what I mean if you've finished the first Lords of Shadow) Since his supposed demise, Castlevania has fallen apart and a 21st century city has been built up and around the ruins. After making it very clear that Dracula is still very much a villain in the larger scheme of things, the weakened Lord of Shadow finds a reason to finally come out of hiding.


Before he can achieve his goals, though, his first order of business will be getting his strength back. Dracula's quest for power sends him to an "abandoned" laboratory where he must employ (gasp) stealth to sneak by and deceive enemies deemed too strong for him to fight head-on. Rather than risk frustration by creating what a cover system for what seems like a secondary, the game adds a set of contextual abilities for stealth situations: In one sequence, players shape-shift into a rat to hide from a hulking, mini gun-toting guard, then possess him to open a locked door. Though the stealth sequence was thankfully brief, the tutorial language guiding players through suggests there may be a few of these sequences sprinkled throughout the game.
Related to:
michael epsteinadventurecastlevaniacastlevania lords of shadow 2konamipreviewreview
0
Tweet