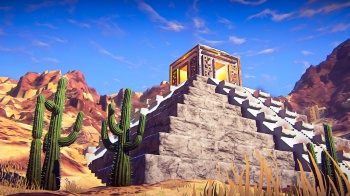 Landmark is true to its name, allowing you, the player, to leave a lasting mark on the world.

After a 15 year franchise history, SOE is trying something different. Instead of just building a game for the players, they want to build a game with the players. In the journey to reboot a franchise, while producing what they hope to be the next evolution in MMOs, an idea was born. What if you were to put the creation tools in the hands of the players, and give them the opportunity to build this world alongside the development team? What if they took it a step further and gamified it, combining all the elements of a sandbox builder and MMO, turning it into a standalone experience of creation, exploration and adventure? Welcome to EverQuest Next Landmark.

One might wonder how a voxel editor, created to build the next big MMO in a franchise, can become a game when put in the hands of players. You don't have to look far to find the success story that is Minecraft, but Landmark is much more than just Minecraft HD. This is the crowdsourcing of game development, packaged into a sandbox exploration game and filled with all the adventure your imagination can create. If you are anything like me, an aspiring LEGO master who never could quite build anything resembling more than a mere box (or stack of boxes, if I was feeling fancy), there is a place here for you, too. Like any social experience, you aren't limited to just your own imagination and talents, as you get to experience the combined vision of all the players around you. Landmark is more like Disney Infinity than it is like Minecraft, but exceedingly more robust, effectively doing away with all the gripes I had about its less than perfect world building. If that wasn't enough, the best creations, or "Landmarks" will actually be featured in the world of EverQuest Next. 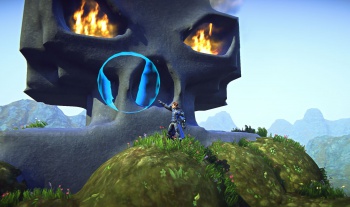 Immediately upon entering the game, you set out in a run to stake your claim. As you run around in a seemingly endless expanse of desert and jungle biodomes, the first thing you notice are the characters. Fully customizable, these humans can take on almost any appearance under the sun, with fluid animation and the best looking aerial flip-jumps I have ever seen. All players start off with an initial claim flag which they can place on any piece of land to make it their own. These areas are locked to the player who claims them, making them off limits to others in terms of mining and building, unless you open up the area for editing to friends and others with the use of the permissions system. While you are not limited to building on claimed land and can affect change by building anywhere, these creations will not persist in the game once you leave them. All claims, whether they exists on the flattest plane or the steepest mountain peak, are based on cubic volume and are all the exact same size. Claimed lands extends to the highest heaven and the deepest earth, and are given buffer zones against other players, allowing you the breathing room to expand on your own time and minimize the potential for griefing by other players.

The current build gives players access to a small vertical slice of roughly 100 feet of world, centered on the ground. There is no digging through the world to other continents quite yet, but there will be eventually. Each sharded world will be unique and be made up of multiple islands of increasing difficulty and rarer elements for mining and building. While each island will have enough real estate for roughly 10,000 claims, we are not there yet and each player will initially be limited to one character and one claim. Even with the minimal space allotted for creation, the creative potential is unbounded. Landmark features a templating system, where all creations can be saved and easily recreated anywhere with a simple copy-and-paste-like feature. As long as you mined all the resources you need, that is. 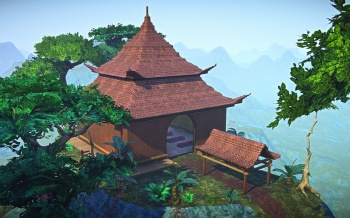 Within a matter of hours, our personal world began to take shape. Players built deep, cavernous tunnels with their pick-axes, riddling the landscape with holes. There where pillars extending into the sky and floating islands populated with building-sized Mountain Dew cans and misshapen ice cream cones. We built houses around afk'd players, and built bridges to connect our creations with one another. We even procured our own tie-fighter at some point. As for my contribution, I built a globular structure of floating "homes", inspired by soap bubbles floating into the sky. While it wasn't anything to write home about, I spent a few minute being awestruck as the sun began to set, and my black obsidian globes began to reelect shimmering colors of pink and gold in the day's last light. At that moment, I felt as though I created something magical, and proceeded to build a giant billboard in the sky to accompany it, complete with my tag on it.

One key point to remember is that this is still an Alpha build. I fell through the world. I couldn't seem to get my circles perfect enough or my cloud-touching towers smooth enough. With groups and guilds not yet implemented, it was all shouting all the time. I even managed to seriously glitch out trying to move entire mountains across the landscape. But, even in such an early stage of development, the potential was clear. I wanted to move mountains and this was a place where I could. It was also stressed that the length of the alpha period will be measured in weeks and months, not months and years. As the editing tool and world it is embedded in grows, we should see closed and open beta becoming available sooner rather than later.


There is a great opportunity here, and SOE seems keen on not wasting it. In a world of ever growing beta testing and crowdfunding platforms giving development voice to future players, SOE has noticed a trend. Players want to make major impact in beta programs, but by then it is effectively too late and can turn into a frustrating experience for everyone involved. With today's launch of Landmark's Alpha phase, dedicated fans of the EverQuest franchise who have pre-ordered the game at the Founders Pack level will be invited into game at a point where feedback still matters, because everything is still subject to change. As was stressed throughout the day, this is not a bug hunt. This is a 20,000 person dev team, where everyone has a chance to stake their claim and make a mark.

This article was originally published at GameFront.com.