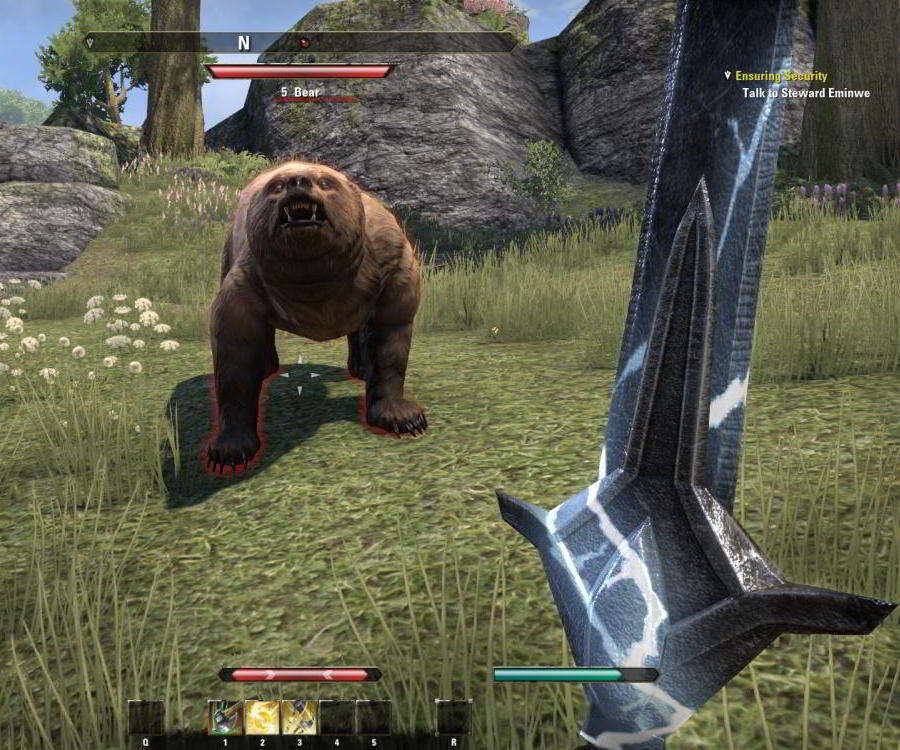 If you're hoping that The Elder Scrolls Online is just like Skyrim, there's some big differences you should know about.

For all its ups and downs and my love/hate relationships with RPGs, I thoroughly enjoyed my time in The Elder Scrolls V: Skyrim. I lost countless hours exploring the land of the Nords, taking on quests, spelunking into Dwemer dungeons, meeting various characters, and battling dragons, yetis, and bears. I even enjoyed some of the not-so-action-heavy aspects of the game, like blacksmithing, making potions and reading some of the many, many books scattered across the game's world.

When The Elder Scrolls Online was first announced, I found myself excited to once again return to the world of Tamriel for some more fantasy dungeon crawling and adventure. But after playing in a recent, week-long beta event and making several characters to get the feel for the game, I've learned that while The Elder Scrolls Online certainly has many elements that make it feel similar to Skyrim, there are some very noticeable differences between the two that any former Dragonborn should know about.

The Environment is More Static

The first major difference between the The Elder Scrolls Online and Skyrim is the game world itself. One of the highlights of Skyrim was that it featured a huge open world to explore, and you could wander into all manner of quests, encounters and other shenanigans just by going for a brief stroll from one village to the next. Unfortunately, technical limitations most likely prevent TESO from having the same giant sandbox seen in previous Elder Scrolls games, and instead adopts a more linear, story-based approach with a wide variety of different locales instead.

Regardless of which faction you pick, all players start off in Coldharbor - a daedric realm where your soul was imprisoned after being captured and sacrificed by a sinister cult - which serves as the game's primary tutorial. Upon escaping, your character will find themselves in a faction-specific starting area, like the desert city of Stros M'kai for those who pick the Daggerfall Covenant, and the familiar, snowy mountains of Skyrim for those who sign up with the Ebonheart Pact. These starting areas are small in focus, with a primary story quest for your character to follow and a handful of side quests to pick up extra experience and gear, but don't expect to run into any random encounters while you're out exploring the wilderness.

Like many MMOs before it, the placement of enemies, quests and item locations are static, and in these early areas there's not much incentive to wander around the game world to see what you can find as there is in Skyrim. As you progress through your character's story, the locations you visit do grow in size, and feature more quests and enemies to fight, which begins to offer up the kind of random, quest-heavy gameplay you'd see in Skyrim. Eventually you'll be able to visit and explore locations all across Tamriel, even those belonging to opposing factions, but it can take many hours of gameplay to reach that point. 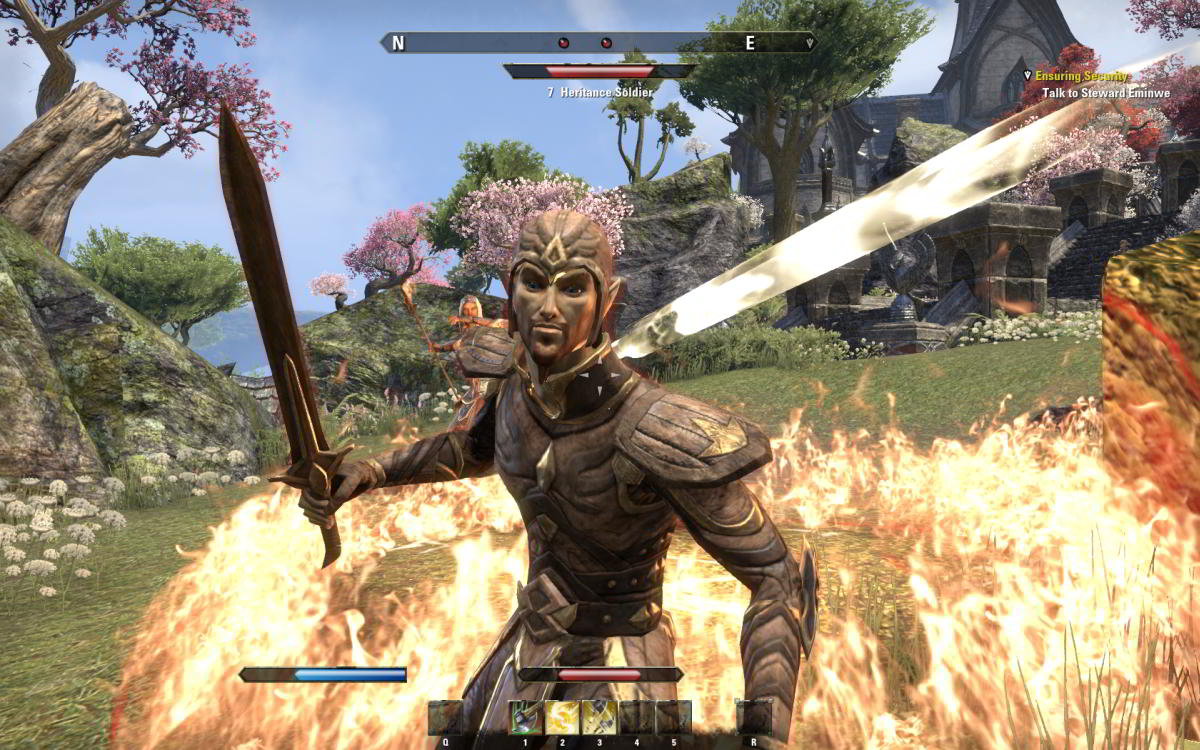 Character Progression Is Flexible To A Point

When it comes to building your character, Skyrim gave you a mostly blank slate to work from - whatever race you picked gave you some bonuses to certain skills and such, but you were given free reign to switch back and forth between them as you'd like. Your skills improved as you used them, and every time you reached a new level, you could choose perks within a particular skill tree to grant bonuses or gain access to new abilities.

TESO doesn't quite allow you the same kind of blank slate approach to designing your character, but does allow for a surprising amount of flexibility. The four classes -- Templar, Dragonknight, Sorcerer and Nightblade -- each come with a trio of class-specific skill trees and abilities that suit the particular play styles those classes are meant to fulfill. The Nightblade, for example, has abilities clearly geared towards stealth and backstabbery to overcome opponents, while the Sorcerer skill trees allow for either the summoning of minions or differing types of magic damage. However, much like Skyrim, you still can wield any weapon or deck yourself out in whichever armor set you'd like, and increase your skills in using that gear much in the same vein of Skyrim. This grants you access to an impressively robust set of abilities and passive bonuses based on weapon and armor types that you can exploit for varying playstyles outside of the normal "Tank-Healer-DPS" types you see in most MMOs. If you so chose, you can make a heavily armored Sorcerer who dual wields axes and calls down lightning on your foes, or a lightly armored, bow-wielding Templar who focuses on healing friendly players from the second line.

There is a catch that can put a damper on character progression, however. Similar to how Skyrim featured Perks, TESO has skill points you can use to buy special abilities in each of the skill trees -- such as the "Cleave" ability available for two-handed weapons. Unfortunately, earning the skill points you need to pick up these abilities is a slow affair, and you'll only get one per level (unless you hunt down the bonus skyshards scattered across the map). This limits you to how many skill trees you can focus on at any time, meaning if you invest a valuable skill point in an ability or weapon type that doesn't work for your play style, you're essentially stuck. The rate in which skill points are earned may be changed in the final release of the game (and it's unclear if there will be options to respecialize your character as well), but as the progression system works now, it almost feels like you're forced to pick a playstyle from the start and stick with it for the duration of your character's existence. 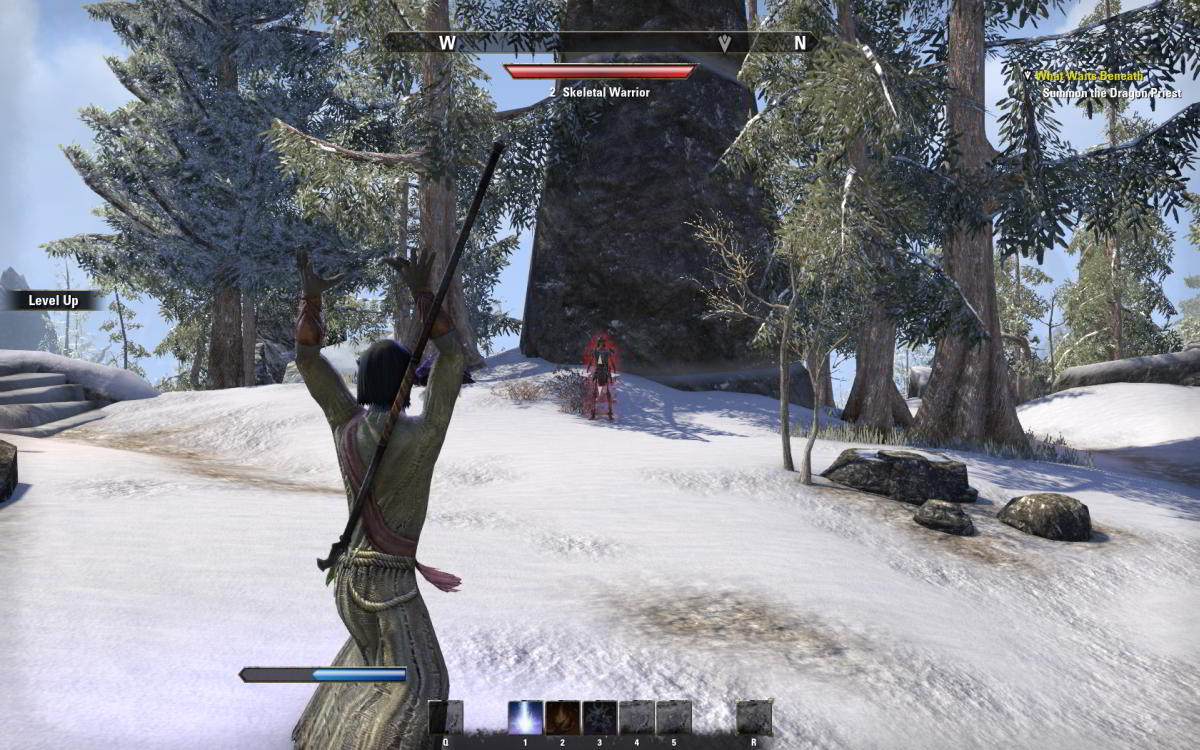 In Skyrim, combat had several various tactics you could adopt. Opting for a sword and shield let you block and bash enemies, or you wield a weapon in each hand to do more damage. Meanwhile, your stamina was used up whenever you tried to hit an opponent with a heavy, high-damage attack or when you tried to absorb an opponent's blow with a block. Regardless, Skyrim combat had a tendency to be a simple process. No matter what weapon I wielded or what magic spell I charged up, most of the time I'd end up just smacking my target around until it died, and even the tougher enemies, like the dragons, could be defeated just by hacking at it repeatedly.

In comparison, combat in TESO is, for the most part, a similar experience to Skyrim, but features a little more strategy. Basic light and heavy attacks don't use stamina. Instead, it is used up by blocking, dodging to the side via double-tapping one of your movement keys, and using certain weapon abilities, meaning you'll have to carefully marshal this resource when you're in a fight. You can simply spam the attack button and cycle through your combat abilities until an enemy is dead, but unlike Skyrim, that style of combat only goes so far. As enemies become tougher, you'll have to pay closer attention to their attack patterns to avoid an untimely death, and make careful use of your abilities to stun or weaken their armor. Interrupting an opponent while they're charging up an attack or unleashing a spell can knock them down, giving you vital seconds to lay into them with your own special attacks or abilities before they recover. Several times in TESO, I was incinerated by fire-blasting imps who blasted me with a magical inferno of pain until I got into the habit of interrupting their flamethrowers, and several other enemies got the best of me because I didn't pay enough attention to where they were directing their attacks.

Since the game is currently in beta, many of these differences do have to be taken with a grain as salt. Many features in TESO could be changed between now and its final release, and the static environments and character design could very much well change over the next few months. But at least right now and in the early levels, TESO isn't quite as robust and open-ended as its predecessor Skyrim, and instead has a more story-based, linear experience that does have most of the same character flexibility that we experienced in Skyrim with a slightly different take on combat.