Editor's Note: In an effort to provide ongoing information on MMO titles we're playing, GameFront offers up a series of impressions pieces. Once we've had enough time to fully experience the game, we'll post a final, scored review. This piece is our take on the first 10 levels of content. 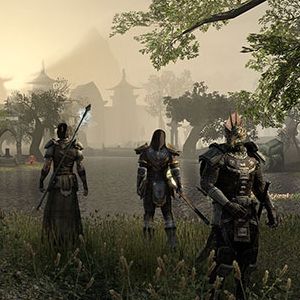 The Elder Scrolls Online offers up a far different experience in its first 10 levels than most MMOs.

The game begins with a tutorial that shows you the ropes, explains how to fight and all the other basics of gameplay. But after that, TESO takes on a different feel. In most titles in the genre, the first 10 levels go by in a blur as you quickly ramp up your abilities in a game's starting areas. In TESO, your first 10 levels are punctuated by exploration and discovery, more so than in any MMO I've played to date.

Characters can vary quite a bit in The Elder Scrolls Online, but not in the early game. There are three factions comprising nine races, but only four classes to choose from. Here are my quick and dirty class descriptions:

Unlike many current MMOs, TESO doesn't restrict classes from using any gear at all. If want to make a Sorcerer who dual-wields daggers, that's totally okay. You could also make a Nightblade who uses a magic staff. It's all up to you.

The same goes for your armor. Just because you're a Dragon Knight doesn't mean you need to wear heavy armor. You also can mix and match armor types without any problem. Some gear pieces may have more beneficial stats for your class than others, but you can wear anything. It lets you have a lot of freedom in designing the type of character you want to play.

TESO also includes a raft of character customization options. If you're one of those folks who likes to get their character designed just so, be prepared for lots of options and sliders. You can adjust anything from hand size to hair style to eye color, and just about everything in between. Just like a lot of things in TESO, it's very reminiscent of The Elder Scrolls V: Skyrim.

The Elder Scrolls Online doesn't just encourage players to explore the vast world of Tamriel -- it requires it. Unlike a typical MMO, TESO doesn't have a host of quest givers around town just waiting to have you kill 10 bears. Instead, you'll find the main story quests and an occasional side quest in town, but if these are all you bother to complete, you'll find yourself in a precarious position before you finish the story in the starting zone. You might even be too weak to progress.

You see, the vast majority of the side quests in TESO are not simply handed to you. You'll have to go out and explore the world to find them. You might find some ruins where the spirits are restless and you need to help rescue someone who's lost, or you might find a town that's under attack. Regardless of what the quest is, you can't pick it up or even see it on the map unless you've explored the area in which it's found.

This is actually a nice touch, as it forces players to do more than just grind out quests. It places a premium on exploration and discovery, something that's gone missing from the MMO genre of late, save for the few people who have the urge to explore every inch of the map. If you're one of those, you're going to find all sorts of fun thing in TESO.