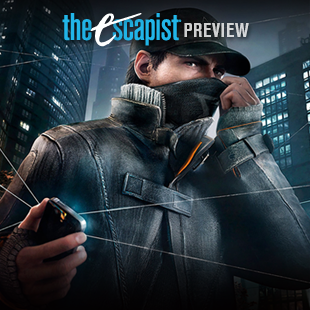 Turning our greatest weakness into a strength, Watch Dogs puts you in the shoes of hacker extraordinaire, Aiden Pierce.

Most of us don't give a second thought to how connected we, and our world, are connected online everyday. At any given moment most of us have at least one smart device within reach, for many of us, it's several devices. What would you do if you had unlimited access to not only other people's smartphones, tablets, and computers, but streetlights, surveillance cameras, and even building infrastructure? Will you hack the school teacher's cell phone to get her bank records or will you intercept the drug trafficker's text to stop a deal? Watch Dogs puts that scenario in front of you, and you'll need to decide what kind of person you choose to play as.

I recently spent a few hours at a Ubisoft press event playing Watch Dogs on the Playstation 4, both in free roam single-player and online multiplayer. I'm happy to say the wait has not been in vain. After being delayed from a Holiday 2013 release to May 27, 2014, the development team used the extra time to put finishing touches on the open-world experience. The build I played looked and felt great. In fact, it looked so great I wrongly assumed I was playing the PC version. It's important to remember builds of a game change over the development process, so while certain scenes may not look identical to their trailer counterparts from 2012, the overall world of Chicago looks fantastic.

I began my playthrough learning how anti-hero protagonist Aidan Pierce went from being a hacker and a thief to a man out for revenge. Story spoilers aside, Aidan is a conflicted character and you as the player will need to craft what kind of man he becomes through the choices you make in the sandbox of Chicago.

There is an extensive RPG-styled skill tree consisting of four main parts, Hacking, Combat, Driving, and Crafted Items. Spending earned skill points will unlock bonuses that will help you be a better driver, a savvier fighter, or give you access to cool gadgets, depending on which playstyle you choose to invest in. Each individual branch varies on the amount of options, but it was extensive enough that I asked Creative Director Jonathan Morin about a "New Game Plus" mode, and he told me that no such mode exists as there is enough ancillary content for players to continue leveling after they complete the main mission.


At first glance, Watch Dogs appears to be a GTA clone, right down to the car hijacking, city traversal, and third-person shooting mechanics. I asked Morin what makes his game different.

Hacking can be used as much or as little as you want in the game when you are in free roam mode, but from my short experience with the game, mastering hacking can be extremely useful. There are a variety of ways, and objects, to hack using a series of button prompts, including using mobile apps on your phone like Jam Coms which interrupts phone calls. Or if you are on the run from the police you can change stoplights, blow open steam covers, and even raise bridges with the single press of a button.

You can travel almost everywhere you look in the open world by walking, running, swimming, driving, or even taking the famous L train, which also acts as a fast travel system. Aidan isn't as swift on his feet as his Assassin's Creed counterparts nor is the driving as fluid as Grand Theft Auto V, but I'm hoping the skill tree system will help improve that as you play through the game. There are all kinds of locations to visit in Ubisoft's interpretation of Chicago, including Pawnee, Parker Square, and Mad Mile.

Many people have inquired about the size of the world, and while it certainly seems quite large based on the map I saw, it isn't going to be largest in open-world history. "I think size is something you put in a game for a purpose. You want to make sure you have the gameplay dynamics that need it, or else you are just doing it to create more space between A and B," explained Morin. "It's a huge city. It's a very dense one, but I always say don't expect the biggest city ever created in a video game."

While running or driving through Chicago you'll inevitably end up fighting someone. When you do engage in combat, do so carefully. Aidan is a mere mortal and cannot sustain heavy gunfire. There is a whole Combat branch to the skill tree, but utilizing the stealth and cover system was a more successful path to victory, at least for me. There are plenty of ways for you to practice your hacking, fighting, or sneaking by going on some of the hundreds of side missions. Like many sandbox games, it is very easy to stray from the main storyline with fun distractions like a ride in a Spider Tank on a Digital Trip. Yes, I said Spider Tank.

I asked where the inspiration for Digital Trips can from and Morin said, "We found on the web those kind of digital/audio things that can trigger hallucinations on your brain. We thought that was pretty cool, and we decided to just exaggerate that a little bit...The Spider Robot tank is kind of an exaggeration of the cyberpunk inspiration we have in the game."

In addition to Digital Trips there are Fixer Contracts to fulfill, Gang Hideouts to infiltrate, Criminal Convoys to take down, and more. Still need more ways to avoid finishing the game? How about mini-games? Poker, Drinking Games, Chess Puzzles, and AR inspired Cash Runs are just a few of the options.