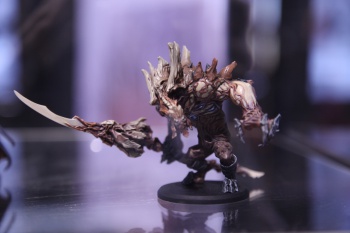 At first I was deeply skeptical on the concept of Prodigy: A tactical miniatures game combined with a computer RPG doesn't precisely sound like it lines up. You have a board, with miniatures that when manipulated affect the positioning of those same characters on the tactical grid in the game. At the same time, you see a digital representation of your opponent's grid with 3d models of their characters. From there, when your turns come up, you can make your characters act by moving them and throwing down power cards onto the board that activate their abilities, make them attack, defend, cast spells, or other things. When I found when I actually put my hands on the game and played it, though, defied expectations: Prodigy is awesome in the way that only a physically interactive experience can be. It reminded me of the first time playing Rock Band, in that I was experiencing a new way to interact with videogames. That's an experience that kids have been having for a few years now with Skylanders, but until Prodigy launched its ongoing kickstarter adults hadn't been able to share that magic.

Making the real flawlessly connect with the unreal has always been a goal for Hanakai Studio founder Jean Bey, who I was able to speak with during my hands-on time with the game's alpha prototype. "I have been working in the board game and miniatures industry for thirty years," he said to me. Bey's experience as a modeler is evident in everything that Prodigy has going for it - the figures are simply beautifully sculpted and full of inventive design, the cards are simple, pleasing designs, and even the board has sleek beveled edges. It's simply not the kind of fantasy art you commonly see. "It's insane. Since I was a kid I loved miniatures. I loved figurines." Blending that love of miniatures, and that experience in the simplicity of tabletop game design, with the video game world was a huge task. "My main idea was to create something very magical," said Bey. He and his team have been experimenting with a variety of technologies to get to where they are. "Slowly we found a way," he said.

The way is deceptively simple. A board of near field spaces, with near field chips in each miniature and power card. The whole board is reactive to your choices, and knows where you've moved miniatures and when. As you move, board spaces light up blue to show your power's effect. When your opponent - who could be thousands of miles away with their board - is lining up attacks, the spaces glow red. Meanwhile the action is reflected in unreal engine powered animations on your computer screen. 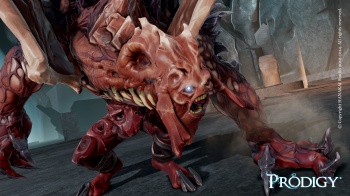 I was honestly shocked at how fun Prodigy was. The thrill of manipulating figures and cards on the field as your sole control of the game feels very unique. As you move the figures and cards, you can see your angle of attack, and your areas of effect, light up on the board. It turns the fiddly joystick positioning exercises of a game like X-COM into a more touch based effect. Because you can quite literally see what your tactical situation is, you approach everything a little differently - in a good way. Once you threw down your cards to select your attacks, you got to see the interaction between figures played out as game animations on the screen. Because of that direct correlation, the one-to-one interaction between figure and game, it was very easy to become more invested in your characters. Taking a fallen soldier off the board when you lost them? Precisely as crushing as doing the same in a tabletop game, and quite unlike anything in video games.

While the team is still being vague about their storylines, the dark fantasy elements described were really interesting. What they want to do with emotion and branching storylines sounded a lot like a Dragon Age game, but with some of the epic melodrama that one might associate with a Final Fantasy game. If the prototype is an indication of where this game is going, I expect that Kickstarter backers will not be disappointed with Prodigy come next year.

Prodigy is currently funded on Kickstarter. Its Campaign ends May 2.