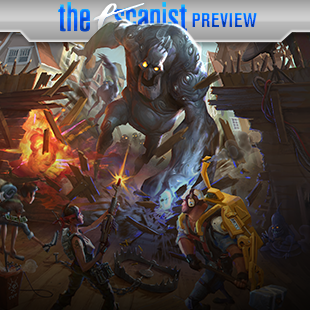 It seems like everybody's getting on the free-to-play bandwagon in some capacity, and Epic Games is no exception. Fortnite throws you into a mysterious apocalypse, where "The Storm" is spawning demonic little nasties called Husks all over the place, and it's up to you to fight them back. Very little has been said of what The Storm actually is, but suffice to say it's not great for humanity, so it must be stopped. You'll be able to shut down "Gates" - constructs that somehow feed into The Storm - in the PVE campaign, which stops The Storm from spawning baddies in that area.

The hands-on demo offered three classes to choose from - Ninja, Commando, and Constructor - with more options to come for the game's eventual launch. The Ninja is a close-combat specialist, preferring edged weapons like the katana to guns and bludgeoning tools. The Ninja has access to double jump, making it the most agile class, but being melee oriented, you have to be careful not to get overwhelmed. The Commando is a ranged class, using assault rifles and shotguns. Commandos specialize in taking out Husks from a distance, with class bonuses to gun damage and reload speed. The Constructor is just what it sounds like; a building class. The Constructor gets bonuses to building in speed and health, and can drop a device that gives bonuses to all characters building in the area.

Each class has its own unique set of skill trees, like the Ninja's Shinobi tree, that allow you to customize your character as per your playstyle, or according to the needs of the mission ahead of you. Respecs are free, so you're welcome to tinker around with different builds to see what suits you. I focused on the Ninja, and talents like increasing bladed weapon damage and reducing the energy cost of double jumps were fun to toy with. The current level cap is 20, meaning you'll have a total of 20 points to assign. Some skills cost 2 or even 4 points, so you'll have to pick and choose which path you want to go down. The class options play into how well the game does at providing offerings for all sorts of players. I'm not much for building - I'm lucky to get four walls connected into a single-room structure - but I'm a sucker for some katana-swinging mayhem, so the Ninja was right up my alley.

The PVE campaign is a series of missions on procedurally generated maps that takes you through the world map hex by hex. You'll have choices on where to head next from the world map, and you'll have to decide which area's resources would be most helpful to the group at any given time. The missions consist of everything from base defense to escort quests, but invariably involve some kind of structure building component. If you're trying to shut down a Gate, you'll have to activate it, build up some defenses, and defend it for a specified time. You'll might have to build a multi-story structure where you can construct a radar tower on top, all the while defending your progress from assaulting Husks. The demo was ostensibly just a small slice of what is to come, but there was a distinct lack of variety in the few missions we did get to play. The environments were varied, but the objectives were fairly nondescript.

The gameplay has something to offer most kinds of players. You're welcome to focus on the combat segments of each mission if that's your jam. You can be the go-to forager, collecting materials by attacking trees, cars, and rocks with a pick. Or you can be the builder, constructing impenetrable defenses, setting up traps, and repairing your structure between waves of Husks. Of course, you're encouraged to do all three to some extent, but the ability to focus on doing what you enjoy will definitely make the game a bit more accessible to a wider audience.

There are already several different types of Husks in game, and there will be more to come in Beta and eventually at launch. The basic Husks are squishy little melee guys, then there's Baseball Husks, wearing a uniform and tossing things at your head. There's a Smasher that devastates defenses if you let it get too close, and a Flinger that will hurl other Husks onto (or into, if you fail to build a roof) your structure to attack from within. Learning how to combat all of the varieties of husks - especially with the promise of new types of enemies being released fairly regularly - is definitely a feather in Fortnite's cap. You can just swing a katana like a maniac at the base Husks, but you better come up with a new tactic when the Smashers come out to play.