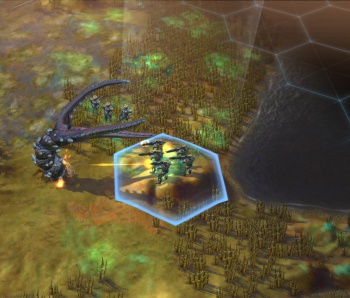 The new game from Firaxis Studios will cease depending on history - Civilization: Beyond Earth will go into space.

The scope of Civilization has always been that of human history. What happened, or could have happened, on this island Earth? It was a game that allowed you to express your will over every era of recorded time, and only hinted at the existence of other worlds, of the possibilities of the mind. Sid Meier created the framework through which we can explore turn-based strategies for our imaginations, not just re-chronicle the past. In Civilization: Beyond Earth, you travel to new worlds and explore your surroundings with very little context of human history necessary. Beyond Earth is a game about discovery, of finding out about the place you have landed upon and the circumstances the human race finds itself. And how you will lead it forward.

I went to the Firaxis office outside Baltimore, Maryland, last week with the ostensible purpose of playing more Beyond Earth in order to write a preview of it. I've been on millions of these trips and met countless game developers and they are usually a stuffy bunch. They'll laugh at your jokes, maybe crack a smile, but they are just there to pimp their games. The people at Firaxis are nothing like that. There are genuinely kind and passionate game designers in every office chair, and studio head Steve Martin and designer-in-residence Sid Meier foment an atmosphere of iterative design while simultaneously respecting and encouraging a strong work-life balance you don't hear about at other studios.

"Sid embodies the attitude," said Anton Strenger, gameplay designer on the two Civ V expansions and not working on Beyond Earth. "He's very generous in giving the reins of projects to young people, to old veterans, and he loves to play and see and talk about the games with anybody that's interested."

Meier doesn't actually design most of the games that bear his name. Instead, he acts as a guiding force behind each major release coming out of Firaxis - a mentor to bounce ideas off of or offer solutions to problems. For Beyond Earth the role of lead designer is filled by two people - Will Miller and Dave McDonough - and they've created a game that feels a lot like its predecessors and completely different at the same time. The team is led by producer Lena Brenk, and lead gameplay designer Anton Strenger, with veterans like producer Dennis Shirk and art director Michael Bates, who was an artist on Sid Meier's Gettysburg back at MicroProse, anchoring the development.

Beyond Earth uses a lot of the same language in its UI and feedback to the player as Civilization V and that is completely by design. You play on stylized 2D map of an alien planet displayed in tiles or hexes. You represent a nation or faction of people that have launched off of Earth around the year 2600 AD. Between then and now, a disaster befell our planet - something the designers refer to as the Great Mistake - and travel to distant worlds began to look more attractive. You start the game answering a series of questions about how your spaceship is equipped, what kind of colonists you're bringing with you, or what kind of electronic systems are installed. These translate to concrete bonuses in the game, which will impact your play quite a bit. For example, I chose a ship that was a Continental Surveyor that allowed me to start play with all of the coastlines revealed from under the fog of war. Other bonuses include extra population, revealed location of alien nests, and an additional starting technology. You'll also be able to scan for planets to play on, a clever representation of map selection and natural parameters in Civilization.