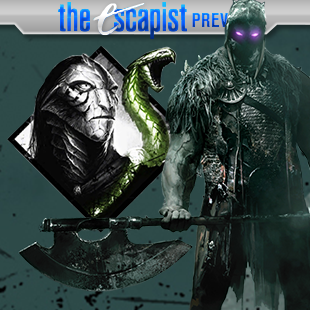 Travel and accommodations to the preview event were paid for by Wizards of the Coast.

At Pro Tour Khans of Tarkir earlier this month, I had a chance to play through the Magic 2015 - Duels of the Planeswalkers (Duels 2015) expansion, Garruk's Revenge. This time around, you're playing as the titular Planeswalker, Garruk, as he stalks those who would hunt him through the plane of Alara. Surprisingly, the biggest news isn't the expansion itself, but Wizards' response to the "pay to win" concerns in the form of Premium Boosters in Duels 2015. Wizards of the Coast and Stainless Games are proving that they listen to the players by changing the Premium Boosters (purchased via microtransaction) into Battle Boosters, which are earned through multiplayer.

Despite Duels 2015 offering players what they've been asking for since the original Duels - truly custom deck building - the inclusion of the Premium Boosters incurred the wrath of a large swath of the playerbase. The Premium cards weren't all that much more powerful than the cards you unlock through regular play, but the additional options and synergies can have a profound impact on balance all the same. Players were put off from the multiplayer, because they were worried about having to face down those who'd paid to unlock the Premium Set. Wizards heard these concerns, and opted to nix the concept entirely. Instead of paying to unlock the Premium Set, now you'll earn the renamed "Battle Boosters" for playing online.

Wizards has make-goods planned for players who purchased the Premium Boosters as well, though specifics have yet to be finalized. It's entirely possible that if you've unlocked the whole Premium Set, you'll be able to grab the expansion free of charge. Additionally, if you don't want to have to grind boosters through play, you'll be able to unlock sets individually for a few dollars, or get the "Instant Collection" which unlocks every card in the game for a bit more.

The expansion itself consists of four bosses and the plane of Alara to explore. A new set of Alara-block cards can be unlocked, including some fantastic options for deck building, like Rafiq of the Many and Kresh the Bloodbraided. You'll get access to Akrasan Squire and other Exalted cards, as well as some token generators like Sprouting Thrinax and Devour creatures to gobble up your tokens. Given the sharded nature of the Alara plane, you'll be getting access to the uncommon tri-lands corresponding to each of the five shards, like Bant's (Blue/White/Green) Seaside Citadel.

You'll have to defeat the bosses for the first time playing with Garruk's deck, which starts out predominantly Green with some Black splashes. As you defeat bosses and progress through the story, the curse on Garruk continues to corrupt him, and his deck will shift with him. You'll lose Runeclaw Bear in favor of Putrid Leech, for example. You'll eventually pick up cards like Putrefy, as well as some all-around Black spells and creatures, indicating his increasing corruption. It's also the first time ever in Duels that you'll get to play with a proper dual land, Bayou. Sadly, you don't get it for your collection, so you can't actually build with it.

The expansion bosses range from remarkably easy to insanely difficult, and some of them will take you many tries to defeat, unless you get fairly lucky. The mono-black Xathrid boss, for example, will bide his time with cheap removal spells until he can start casting Corrupt and Nightmare, which is incredibly hard to power through without being able to customize your deck. This was the most notably difficult boss, as I managed to take down the others in fewer than three attempts.

Duels 2015 runs $9.99 and Garruk's Revenge, which is slated for a November 5 release on at least some of the many platforms, will only set you back $4.99. The changes to the Premium Boosters from the core game make it well worth the expense. With a new motivation for playing multiplayer and whole new deck archetypes available with the Alara set, you'll be able to get in a lot of matches for your investment.